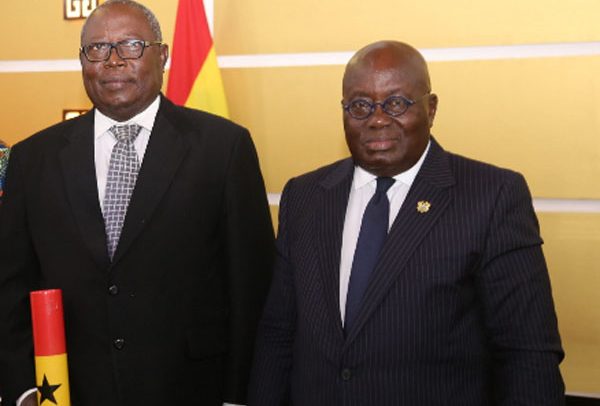 He tendered in his resignation in a letter to the President saying his decision was to “enable Your Excellency to take steps to appoint a replacement to that position as required by law,” after he claimed there was interference in his work.

An acceptance letter directed by the President and signed by the Chief of Staff, Akosua Frema Osei-Opare, titled: Re: Resignation of Appointment As Special Prosecutor, said “this is to acknowledge receipt of your letter, dated November 16, 2020 (Ref: OSP/2/AM.14) addressed to the President of the Republic conveying to him your decision to resign from the Office of the Special Prosecutor. The President has taken due note of the other matters raised in your letter and the government will issue a statement responding to them in due course.”

The letter said “the President has directed me to ensure that all emoluments and benefits due you under law are paid to you accordingly,” adding “The President thanks you for your service to the State and wished you the best in your future endeavors.”

Earlier, the presidency through the Communication Director, Eugene Arhin, had issued a statement indicating that the President had asked the Chief of Staff to convey his gratitude to Mr. Amidu for his work.

“The President of the Republic, Nana Addo Dankwa Akufo-Addo, has taken note of the resignation from Office of the Special Prosecutor, Mr. Martin A. B. K Amidu, by letter dated Monday November 16, 2020. President Akufo-Addo has also taken due note of the other matters raised by the Special Prosecutor in his letter of resignation, and the presidency will issue a detailed response to them shortly.”

The statement added that “The President has directed the Chief of Staff to contact Mr. Martin Amidu to resolve all outstanding matters consequent upon his resignation,” adding “President Akufo-Addo thanks Mr. Martin Amidu for his service to the country and wishes him well in his future endeavors.”

Before the statements from the presidency, the ruling New Patriotic Party (NPP) urged President Akufo-Addo to accept the resignation of Mr. Amidu and initiate processes to find a successor to continue the fight against corruption.

According to the ruling party, the job of the SP is “sensitive and important,” which is needed to realize “the true ambit of the powers of the OSP in order to ensure the success of the fight against corruption.”

The Communications Director of NPP, Yaw Buaben Asamoa, in a statement, said the NPP had received with ‘shock’ and ‘dismay’ the news of the resignation of the SP, saying “shocked because Mr. Amidu chose to walk away from the golden opportunity of establishing a brand new effective agency, having had the best part of three years to demonstrate and cement his undoubted anti-corruption credentials in doing so.”

According to the NPP, unfortunately Mr. Amidu chose to resign and that the party believed he had all the room he needed by law and mandate to operate, notwithstanding anything anybody did, especially the President.

“Indeed, his actions appear to impact both the incumbent and immediate past government, vindicating the wisdom of the mandate and powers of the office which he occupied. An office hinged on independence of thought and action,” the NPP said.

The ruling party indicated, however, that it was dismayed that the action of the SP appeared founded on “a desire to build a culture of infallibility in executing the mandate of the office.”

It stated that the independence of the SP’s Office could not be infallible, saying “independence is the absolute right to act within the given powers of the office. Infallibility is the assumption that nothing from the office can be questioned under any circumstances.”

For the NPP, that will mean abandoning the sacred rule of “Audi Alteram Partem”, enabling an accused person whose liberty and reputation are at stake the basic opportunity to protect his or her reputation and defend his or her right to different freedoms.

“Audi Alteram Partem is also directly hinged on the high burden of proof beyond doubt required to deprive a person of their freedom for criminal reasons.”

“Reading Mr. Amidu’s letter of resignation, it would appear that he purposed to resign because the President sought to apply ‘Audi Alteram Partem’ rules to enable the Finance Minister state his part.”

The statement pointed out that the NPP believed the singular most important challenge to the OSP was substantive verification on fair terms as to the law and interpretation of the intent and actions of persons of interest.

“In other words, the very independence and authority of the office demands that its conclusions hold up to scrutiny. Without the scrutiny of fair hearing, the occupant of the office may equate the powers to that of an enthroned demi-God, far superior to the dictates of human affairs which subject the powers of the office to the competent jurisdiction of earthly judges,” the statement explained.

In this regard, the NPP said much as the SP’s Office had the power and right to issue the report on Agyapa Royalties Transaction, the recipient President also had a duty to engage the Minister of Finance, Ken Ofori-Atta, who in his memo was requested by the President in response, “clearly engages very transparently on the issues raised in the report.”

“This cannot be an attack on his independence severe enough to lead to a resignation,” the NPP asserted, and added that it believed the President had been forthright with the model of compliance.

“The approach of the OSP by way of an advisory assessment is novel, and therefore all the more significant that the President was very responsive.”

“For the NPP-led government, the vindication of the President’s belief in the need for an independent office with sufficient power to act in the public realm, irrespective of status, implied major progress in fighting corruption.”

“Not only is the OSP independent of all political influence, it is also capable of initiating its own actions. As the SP himself says in the report,” it indicated.

In a related development, Chairperson of the Board of the Office of the SP has claimed Mr. Amidu did not inform the board he was resigning.

According to Mrs. Linda Ofori-Kwafo, who also heads the Ghana Integrity Initiative (GII), the local arm of Transparency International, they all got to know about Mr. Amidu’s resignation in the media.

“As you can see from the letter, which was directed to the President, the board itself was not copied, so, the board got to know the information or got this news just like any other person got it. So, we are also reading for the first time and then, as a body, it will be good for us to meet for us to assess the situation and also look at it from the point of view of the Act, Act 959, which makes reference to the Office of the SP and then we will know the way forward and then, appropriately, the board will be able to comment on all issues. Until then, it is impromptu for anyone to make any comment,” she said.