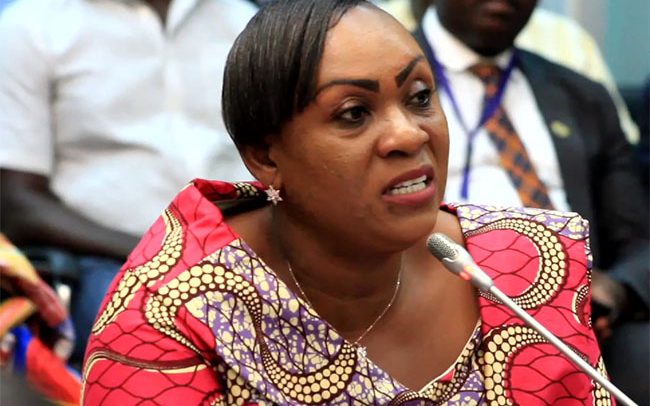 Fisheries and Aquaculture Minister, Mavis Hawa Koomson, has said her interactions with experts investigating fish mortality over the weekend is showing that stress might be a factor in the massive deaths witnessed.

“Officers from the Fish Health Unit and the Scientific Survey Division of the Fisheries Commission were dispatched to Osu Beach following a report on fish kills to verify the situation and samples were subsequently taken for further investigation,” she said on social media, adding that “I, today, interacted with Veterinary Doctors of the Fish Health Unit of the Commission to be updated on the progress of the investigation so far.”

“According to Dr. Peter Zidda, a fish health specialist of the Fisheries Commission, preliminary investigations conducted so far has revealed that the fish kills occurred as a result of stress factor on the side of the fishes,” the NPP MP for Awutu Senya East posted on Facebook.

She said, “He, however, added that, further pathological investigations on the gills of the fish kills are ongoing, and any new development will be made public,” adding that “my office is committed to ensuring that fishes from our shores are safe for consumption at all times.”

The washing ashore of some hundreds of dead fishes along the beach at Osu, in Accra, and live marine mammals suspected to be dolphins, in Axim, in the Western Region, triggered a flurry of investigations at the Fisheries Commission and the Environmental Protection Agency (EPA).

At first it was the sighting last Friday of some fishes along the beach close to the Castle Road, as the authorities cautioned the public from picking and consuming them.

Then by the weekend, many dead dolphins washed ashore in Axim.

The unusual occurrence at Osu, Accra, attracted a large crowd, a situation which had environmental officers rushing to the scene to stop excited bystanders from picking and consuming the dead fish.

The Ministry of Fisheries and Aquaculture Development subsequently led the investigation with other agencies including the Fisheries Commission, Food and Drugs Authority (FDA), the Environmental Protection Agency (EPA), the Ghana Maritime Authority (GMA), the Ghana Navy, the Marine Police and the respective Metropolitan, Municipal and District Assemblies in the areas affected.

The investigation is expected to determine the causes of the deaths as well as an effective collaboration to prevent the dead fishes entering the country’s food chain.