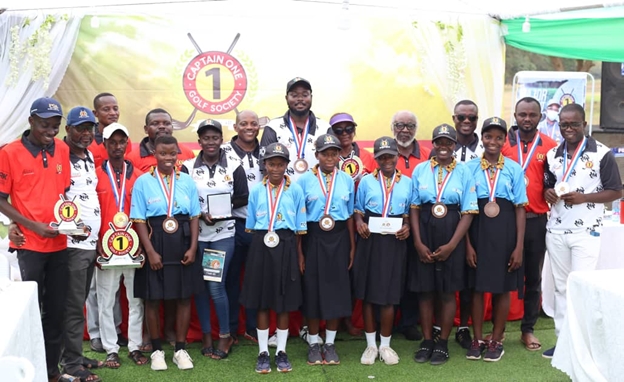 The winners and organisers in a pose after the competition

One of Ghana’s finest amateur golfers, Craig Tandoh, has emerged tops in the sixth Captain One Golf Society’s Charity Golf Championship at the Royal Golf Club, Kumasi on Sunday.

Tandoh recorded a 142 points over two days to clinch the topmost prize to beat Felicity Okyei-Bonsu, who surprisingly gave the men a run for their money.

The experienced female golfer, who became the only female to take a top three position since the Captain Major began six years ago, recorded 146 points ahead of Maxwell Owusu-Bonsu’s 148 points to settle for the third position.

The overall winner received a giant trophy, gold medal and a cash voucher of GH¢5,000 for his efforts, while the second position had GH¢2,500 voucher, silver medal and a trophy, with the third position also taking home a trophy, bronze medal and GH¢1,500 gift voucher.

The Longest Drive (men) for day one of the event was won by Lesley Boakye Yiadom, while Vivian Dick took the prize for the ladies Longest Drive.

It was Seth Bekoe Apeadu, who won the seniors, while Philip Andoh settled for the second position.

The Captain One Kid’s Championship, which saw over 20 female golfers -the Safe-Child Advocacy and other kids from less privileged backgrounds participating, preceded the competition on Friday.

The kid’s event was won by Hudu Zakiya with 270 points after coming tops in putting, chipping and shooting.

She was followed by Mary Torhetey with 205 points, while Satura Modesta also had 205 points for the third position.

The juniors event was also won by Paula Kokame with 140 points.

President of the Captain One Golf Society, Pius Ayeh Appiah said, “Most interesting is the fact that an amateur golfer has won the event, equaling the number of times the professionals had won it – three times each.”

That, he said, was the idea behind the events which would provide the platform for all golfers, from professionals, amateur as well as kids to exhibit their talents.

He said, “the kids had also developed massively and showing great skills on the course,” adding that they would soon produce one of the best golfers in the world through the Captain One initiative.

Nightmare In A School