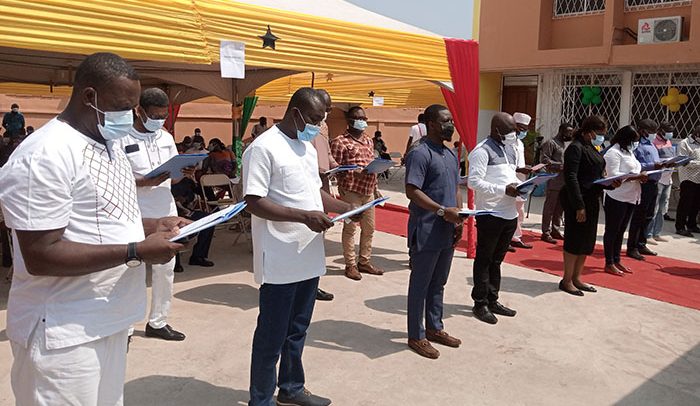 The magistrate administering the oath to the councilors

Two sub-metropolitan district councils have been inaugurated by the Tema Metropolitan Assembly (TMA) in the Greater Accra Region.

The two councils include Tema Central and Tema East.

They are 19 councilors instead of 20 at Tema Central as a result of the suspension of one of the councilors by TMA, and 20 at Tema East as sworn in by the judge, Joseph MacLean, in accordance with Section 3 (4) of the Local Governance Act 2016 (Act 936).

Delivering his inaugural address, Felix Mensah Annan-La, Acting Mayor of Tema, charged the councilors to be committed and selfless in the discharge of their duties and be guided by the rules and regulations governing the local government system.

He said the sub-metropolitan councils were important structures in the local government system and must not be undermined.

“Indeed, your position as councilors places greater responsibility on you, not only as citizens, but also as community leaders, and you are expected to exhibit exceptional qualities and commitment towards the realization of the Phase Two of the Tema Restoration Agenda,” he said.

He said “there is no doubt that you are assuming office at a time when communal spirit in our various localities have declined. You are expected to galvanize the grassroots and get them involved in achieving the sustainable development which is eluding us as residents of Tema, the model city in Ghana. As sub-metro councilors, you need to deliberate on issues in your community and be guided by the rules of the work.”

He called on the councilors to come out with innovative strategies to help generate enough revenue in their communities for development.

Touching on one of the greatest challenges of the assembly, the MCE mentioned that the major one was sanitation and said they would work together to rid the city of filth.

For his part, Nii Armah Sumponu II, Awudum Shipi of the Tema Traditional Council, who was the chairman of the occasion, asked the new councilors to work in tandem with the chiefs and traditional authorities of the area and help the assembly achieve its aim, the “Tema Restoration Agenda”.