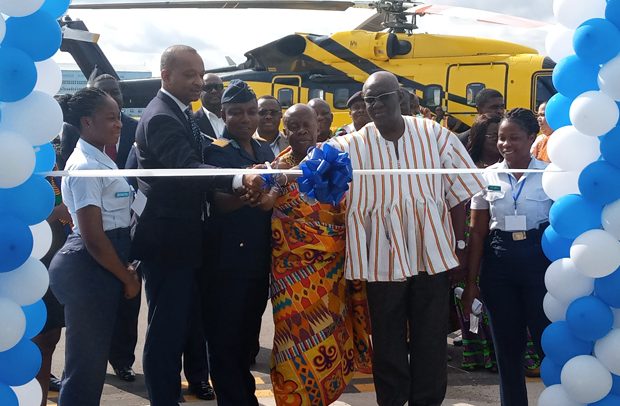 Tullow Oil and its Jubilee and TEN partners have handed over to the Ministry of Aviation, a rehabilitated Tarmac at the Takoradi Airforce Base.

The Takoradi Airport Tarmac also known as Apron, required nine months reconstruction of an area of 22,692 square metres wide, ranging from excavations and the rehabilitation of almost 5000 metres square of adjoining road links.

It also included restructuring parking areas around the Air Force Base, to improve safety and accessibility to boost commercial aviation services as well as facilitate Ghana’s offshore Petroleum industry.

Tullow also commissioned a state-of-the-art office complex at the Airforce Base for onshore operations.

The Managing Director and Executive Vice President of Tullow, Kweku Awotwi noted that the project was made possible by Tullow Ghana and its partners, including Kosmos and Anadarko West Cape Three Point (WCTP) Company.

He added that previously, Tullow Ghana shared the commercial Airport terminal and aircraft apron with the Airforce Base and other oil and gas as well as commercial fixed wing operators.

He mentioned that to help ease congestion, with expansions in Tullow’s operations and to ensure safety and sustainability, the company acquired the old Airforce offices and briefing rooms and converted them into multipurpose terminal for helicopters and fixed wing operations of Tullow.

“The Takoradi Airforce station has been Tullow Ghana’s onshore operations base since we began operations in 2008. The base has been vital for conveying our staff and other logistics to our offshore fields,” he noted.

He pointed out that the refurbished Takoradi Airport Apron was aimed at contributing to the development of infrastructure in the country.

It indicated that Tullow and its partners were expecting that the handing over of the Apron would herald an improved phase of quality aviation services in the country.

The Minister of Aviation, Kofi Adah, commissioning the reconstructed Takoradi Airforce Base Tarmac, commended Tullow and its partners for their contribution to improving development in Western Region and the aviation industry.

“The operations of offshore Jubilee and TEN fields have been key in repositioning the Western Region, demanding an expansion in infrastructure to meet growing demand, making it more accessible to stakeholders and businesses.”

“The Ministry of Aviation commends Tullow and the partners for recognizing a critical need in the aviation infrastructure here at the Takoradi airport”, he indicated.

He pointed out that providing a refurbished apron or tarmac would not only support larger commercial airplanes, but accommodate increased number of flights into and from Takoradi.

He indicated that the project would also guarantee the safety of the travellers adding “all these construction works also create jobs for local contractors”.