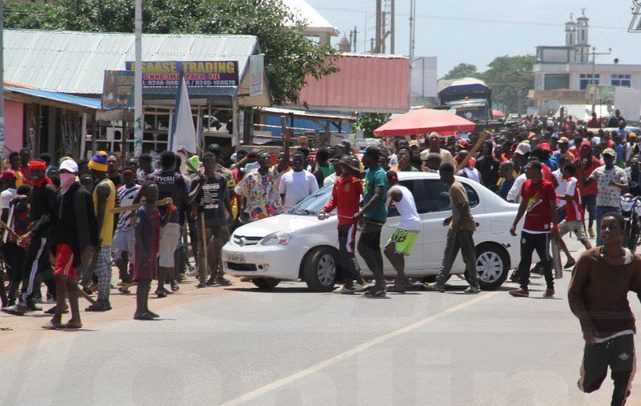 The two slain youngmen in Tuesday’s shooting incident at Ejura in the Ashanti Region, have been buried.

The deceased, Nasiru Yussif and Murtala Mohammed, both in their 20s, were buried in line with Islamic traditions by the Dagomba-Line Muslim Community at Ejura, on Tuesday evening (June 29).

The incident was triggered by the death of one Ibrahim Mohammed, alias Kaaka, 45, who was said to have been brutally assaulted while returning home on a motorbike on Saturday night, June 26.

He died at the Komfo Anokye Teaching Hospital (KATH) three days after the attack, subsequent to his transfer from the Ejura Government Hospital.

What began as a peaceful demonstration on Monday, following the burial of Kaaka, turned violent as the protesters clashed with the security personnel detailed to maintain order, leading to the shooting of the two young men.

Four other people sustaining various degrees of injuries in the mayhem are receiving treatment, with one in critical condition, according to the Management of the Ejura Government Hospital.

Alhaji Abdul Wahab Alhassan, Spokesperson for the Dagomba-Line Muslim Community, in an interview with the Ghana News Agency (GNA), said the Community was demanding justice for the harm done to the people.

He prayed for the souls of the departed men, saying the incident was unfortunate.

Meanwhile, calm had been restored at the area as of Wednesday morning, with the residents going about their normal businesses.

According to the Command, two suspects, Ibrahim Issaka, alias Anyaas, and Fuseini Alhassan, have been arrested in connection with the murder of Kaaka.
GNA