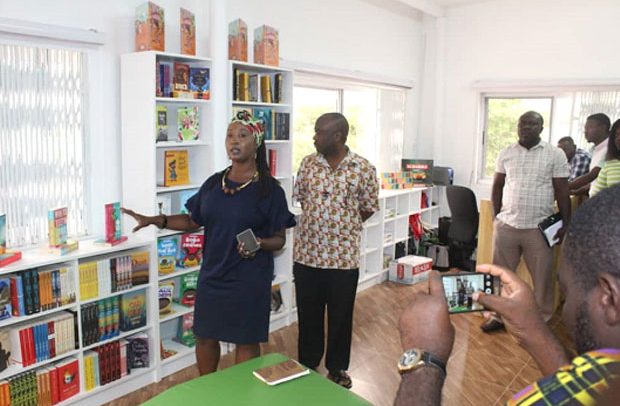 WEST BLUE Consulting, an indigenous IT solutions firm, is rolling out a library project dubbed: “e-Ananse Libraries”, which is a new bold concept in public libraries in Ghana.

The ‘e-Ananse Libraries’ are to help revitalize Ghana’s reading culture and provide people with the tools to compete in the 21st century by giving them access to high-quality contemporary literature, state-of-the-art computing facilities, and world-class literary events.

The first of West Blue’s ‘e-Ananse Libraries’ which opened recently at Osu, a suburb in Accra, has a collection of contemporary and classic fiction, as well as niche collections unique to each of the libraries, including beautiful children’s books, poetry and professional development.

Each of the libraries also has an e-Ananse technology hub christened the ‘Innovation Hub’ equipped with internet-enabled PCs which give libraries members access to the full range of resources available on the World Wide Web.

The centre has a Wifi connectivity that patrons can log on and work independently. Besides, they have an Ananse Amphitheater, an outdoor space, where programmes of live literature events such as author readings, spoken work and movies take place.

General Manager of West Blue Consulting, Kingsley Abeyieh, who was speaking at a media engagement in Accra, said: “The project is designed to inculcate the habit of reading in the young ones and to let them know more about Africa.”

He urged the public to embrace the habit of learning as it would help them to understand and appreciate issues better.

Silvia Arthur, Consultant for the ‘e-Ananse’ project, said the libraries were unlike any other in the country and each library has three dedicated staff members who were abreast of current literature, and ready to assist patrons.

Second e-Ananse libraries would be officially inaugurated at the University of Ghana, Legon.