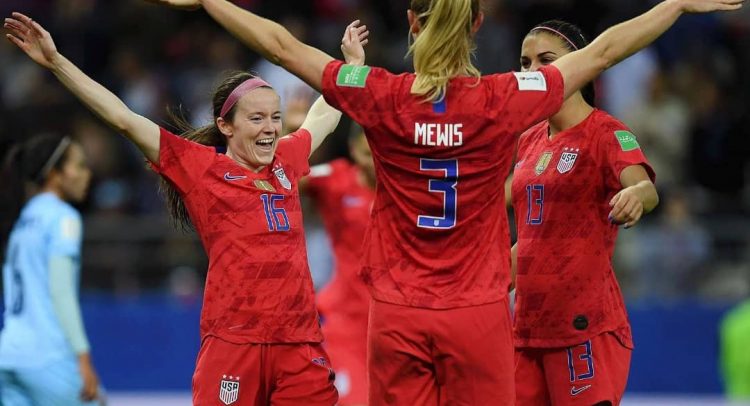 The United States recorded the biggest ever victory in the Fifa Women’s World Cup as they crushed Thailand 13-0.

The 2015 winners were 3-0 up at half-time, scored four times in 10 minutes in the second half and then added six more goals in the last 16 minutes.

The United States’ previous biggest win in the tournament was a 7-0 success over Chinese Taipei in 1991, while Germany’s thrashing of Argentina came in 2007.

1-0, 12 minutes: An unmarked Alex Morgan nodded in Kelley O’Hara’s cross.
2-0, 20 minutes: Rose Lavelle’s powerful strike was helped into the net by the keeper.
3-0, 31 minutes: Lindsey Horan scores from six yards out after Wilaiporn Boothduang fails to clear Tobin Heath’s free-kick.
4-0, 50 minutes: Samantha Mewis’ deflected effort gave her the 800th goal in Women’s World Cup history.
5-0, 52 minutes: Morgan tucked in after Thailand failed to clear a free-kick.
6-0, 54 minutes: The ball bounced kindly to Mewis in the box and she struck another.
7-0, 56 minutes: Mewis turned provider this time for Lavelle, who placed in the seventh.
8-0, 74 minutes: A neat turn and finish from Morgan completed her hat-trick.
9-0, 79 minutes: Megan Rapinoe timed her run to perfection and completed a flowing move.
10-0, 81 minutes: Morgan hit a cracking strike from the edge of the box for her fourth of the night.
11-0, 84 minutes: Substitute Mallory Pugh rounded the goalkeeper and rolled the ball in.
12-0, 87 minutes: Morgan’s brilliant flick and powerful finish delivered the best goal of the night.

13-0, 90+2 minutes: Carli Lloyd raced through the middle and slotted in from close range.

Ruthless USA do not let up

The USA players refused to take their foot off the accelerator in the closing stages, taking an 8-0 lead into the final 12 minutes before adding five further goals.

Several of Thailand’s players were clearly upset at the final whistle, with tears streaming down forward Suchawadee Nildhamrong’s face, while some members of the USA team attempted to console their opponents.

Five-goal striker Morgan said: “With the scoreline tonight, we have to look at the group stage as every goal counts.

“It was important for us to continue to go. We knew every goal could matter.”

The defending champions have lost just one international game since July 2017 and have now won seven games in a row, scoring 36 goals in the process, and not conceding in five matches.