Enhancing National Security Through The Rule Of Law: Challenges And Prospects 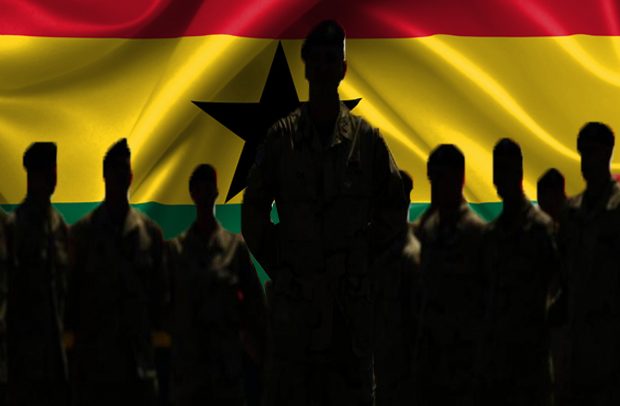 “Those who deny freedom to others deserve it not for themselves”.

WE GOT ALARMED READING the headline: “when lawyers took over military barracks” in the DAILY GUIDE of 12/09/19: Till… we identified the writer: Nkrabeah Effah-Dartey… then we understood the “pun” or “double entendre.” Could a non-military officer dare write “took over military barracks” as “wordplay”? If it were the PNDC era under Jerry John Rawlings, the least “punishment” would be to get an “identification haircut”, a la Nana Konadu Agyemang with broken bottles, and a military drill: “m’aso aye den” at Gondar Barracks. Let us thank God for little mercies.

Nkrabeah Effah-Dartey is a “fighter”, and we are likely to be year-mates at Legon. At “The Hall” when he lost the highly competitive election in the Michaelmas term, he stood unopposed at the Trinity term and won to become the President. He was very methodical, and we consulted his properly arranged newspapers for research work. It would surprise us if he was not among the fewer than 10 students who got Second Class Upper in 1977, like some of us, at a time when not more than four students of the whole University got First Class.

After the opening ceremony, we geared up to listen to Commissioner Nathan Kofi Boakye, on Tuesday. Kofi confirmed by his Antonio-like oratory that he actually deserved the many awards he won at the Ghana School of Law. His topic covered the theme of the Conference: “Enhancing National Security through the Rule of law: Prospects and Challenges”. We had thought that if we were keen on the “Prospects” the “challenges” should have been analysed first – despite the topic – and Kofi Boakye turned the tables. He did not spare anyone: he noted that “the danger is staring at us”. The security threats included armed robbery; fraud (including cyber fraud); sale of human parts; kidnapping; vigilantism; mob action (including those by the press); illicit drug trafficking…

Among the challenges were: the winner-takes-it-all posture; patronage; influence peddling; clannism and politicisation of national issues. There was much pressure on the police administration when it came to recruitment. Appointment by contract kept other senior officers marking time. And in terms of operations, the siren warned the criminals to “go away”. Law-abiding Ghanaians would always kowtow to the authorities and it was only when one applied the “hot-stove” principle (where “heat” was applied on all criminals equally) that people would stop complaining about biased treatment.

According to Kofi Boakye, given the political goodwill of Ghanaians, the prospects were bright to ensure security – when we had papered over the challenges; when the right procedure were followed; when reasons were given for special promotions; when there was political will for any action (including the banning of “okada” operations”). At the base of all this would be a succession plan drawn up by an independent “police commission”. Of course, rule of law was the answer to “Animal Farm”.

Various topics covered the Continuous Legal Education (CLE) on Tuesday afternoon. The plenary one was on the “jurisdiction” of the courts and the distinction between “want of jurisdiction” and “error of law” as grounds for “certiorari”. The speaker was loveable Justice Nene A. O. Amegatcher, Justice of the Supreme Court and the Past President of the Bar with the moderator, Frank Beecham, another Past President of the Bar. The topics for the “Breakout Session” were various: “The Impact of Electronic Commerce on the Sale of Goods Act”, with the speaker, Jude Attakora Tufour of the Central University and the moderator, Francis Koffie, President of the Ashanti Bar; “Property rights of Spouses in Ghana – current trends in law and practice” with the speakers, Justice Brobbey and Eudora Dadson and the moderator, Sheila Minkah – Premo; “And what beyond autonomy? An analysis of the right to self-representation in criminal proceedings in the adversarial system” with the Speaker, Isidore Tufuor of GIMPA and the moderator, Yaa Onyameye Gyakobo; the final topic was “Telling the Qualitative State of Justice Delivery with Figures”, with the speaker, Dennis Adjei Dwomoh of GIMPA and the moderator Perpetual Yankson.

Wednesday, 11th September, 2019, was dedicated to “Tours”: Sea Trip, Visit to Nzulezu, and Trip to Maaha Beach. Of all three, the visit to Nzulezu captured the fancy of many participants and it was heavily patronised. There was a big hustle at the “port” for conveyance of over 300 participants to the village by boat whose capacity was 10, and the need to exchange the safety vests. Those who went on the trip returned to base after 9:00pm. (This is where the Ministry of Tourism could capture the ground, by providing the village with a bigger boat and making the village-on-water more attractive to visitors). The evening “Black Tie Dinner” was better put, non-descript. With an expectation of a patronage of over 500, by 11:00pm, not more than 200 had been recorded. Shakespeare says in “Love’s Labour’s Lost”: “… Beauty is bought by judgment of the eye, not utter’d by base sale of chapmen’s tongues”. Or simply put “Beauty is in the eye of the beholder (beer holder)”. And we were not there to “hold the beer” since we had been hounded out of the Ashley Larsen Hangar for improper dressing. Was it equity, over-zealousness or insistence on protocol?

The following day’s “Health Walk” and “Health Talk” were moderately patronised. Participants – the males- were anxiously waiting to hear something on “erectile dysfunction” and Dr. Doku provided the “filler”. There was spontaneous yell of approval when the speaker said “sex is good to exercise the male organ”, but there was a demur when he added… “With your wife.”

Minutes of the previous conference (Koforidua) were read and adopted. Those of the General Council, the Regional Bar Reports and Representatives on Statutory Bodies were also read and adopted. On matters affecting the Bar, a participant wondered why she was not allowed to move a motion because she was not properly attired (during the vacation). And Kuuku Welsing Jones insisted on the proper designations of the magistrates and judges at the District Courts (Worship), Circuit Courts ( Honour), High Courts and above (Lordships) …

In the evening, the cocktail at the Raybow Hotel hosted by the MCEs of STMA and EKMA was well-patronised. By 7:00pm, the patisserie (including croissants, baklava) (NOT: small chops) had gotten exhausted, but the beers and the “Guinesses” were still “flowing”. The T-shirts were clandestinely distributed, but somebody made sure he got XXL for us since the S and M could be too small for our grandchildren.

Patrons had to wait from 7:00am till 9:30am for the Food Bazaar. It could have been “brunch”, not “breakfast”. Those who were anxious to get back to their destination, had to skip it. We remembered Sunyani… 7:00am prompt, and we were eating fufu and kontomire soup. Those going to Kumasi using the Fosu route had little to worry about, because Hon. Kennedy Agyapong was lurking around Assin Dompim to give the foodies, epicureans and gastronomes a superb treat. For those using the Accra Route, it was Kormantse (We went, but we didn’t hear). T. S. Elliot’s “Journey of the Magi” says: “We returned to our places, these kingdoms, …I should be glad of another death.” Certainly, we cannot afford to miss Bolga next year – the Paga Crocodile Pond, the freshly brewed pito, the spacious, elegant Eastwood Anaba’s Conference Centre. So, Afoko Amoak, hither and yon cometh we.