12 Tankers Destroyed By Fire At Kpone 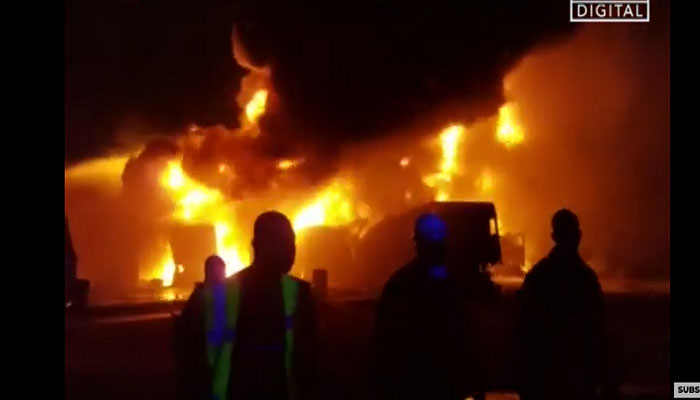 TWELVE BULK oil storage haulage trucks belonging to Goodness Energy have been burnt following an inferno which ravaged the company’s yard at Kpone, near Tema.

Ten of the trucks were completely burnt on Wednesday night, with the remaining two partially destroyed by the fire.

There was no casualty recorded but two other properties — an excavator machine and a footy-feet container— were also not spared.

It is still unclear what sparked the inferno but eyewitnesses claimed that it might be due to illegal transportation of petroleum products from one storage tank to another with the use of generator.

When DAILY GUIDE visited the scene, the area was smeared with petroleum products, while foam had formed as a result of the heavy fire.

More than six fire tenders were brought to quench the fire which had generated thick smoke that was still bellowing.

“We arrived at the area and noticed it was a tanker yard housing about 35 bulk storage tanks with some having petroleum products in them. We were able to stop the fire from spreading and mobilized drivers to move some of the tankers from the yard as we made effort to put off the fire completely,” he recounted.

The Deputy Commander said they were yet to ascertain the actual cause of the fire, as investigation had been initiated into the incident.

Later, officials of Goodness Energy refused to comment on the issue as they attacked anyone who attempted to get closer to the scene.