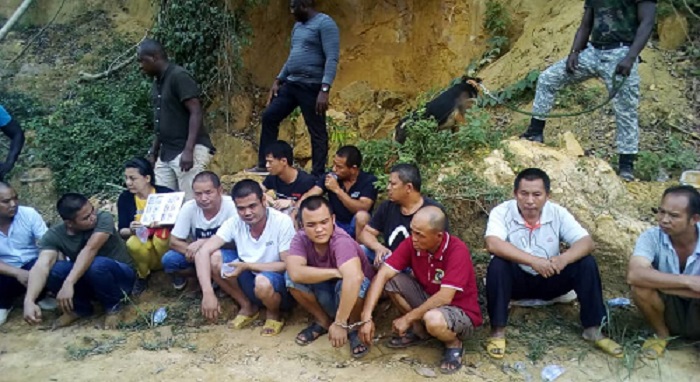 The illegal Chinese miners after their arrest

Thirteen Chinese nationals, including a woman, have been arrested in a forest reserve at Wassa Juabo in the Amanfi Central District of the Western Region in a special operation to tackle illegal mining.

A joint taskforce of the Inter-Ministerial Committee on Illegal Mining and small-scale miners, carried out the special operation at mining sites across the district in the Aminase Forest over the weekend.

The taskforce, which was informed about the illegal mining operation, seized 17 excavators, two pickups and other equipment during the exercise.

It also destroyed some Chanfan machines that were being used by the illegal miners, popularly known as ‘galamseyers.’

Leader of the taskforce, Ekow Ewusi, said the suspects would be handed over to the Ghana Immigration Service to carry out further investigations that would lead to their prosecution and deportation.

He disclosed that since the clamp down on galamsey, the Chinese nationals had teamed up with some Ghanaians, particularly staff of the Forestry Commission to conduct their illegal operation to avoid detection.

He revealed that illegal gold mining in the forest had destroyed the environment and nearby rivers to the chagrin of members of the local communities.

Mr Ewusi said the illegal miners claimed the concession was given to them by a small-scale mining company known as T&T Alaska Company to conduct their operations.

But members of the local communities said the Chinese miners took over the concession without recourse to laws and relevant governmental agencies.

They disclosed that they had been at the mercy of the illegal miners who had taken over their farmlands and forest reserve.

Government, in April last year, placed a ban on illegal gold mining in the country to stop environmental degradation and pollution of water bodies, but lifted it after various interventions.

The Ministry of Lands and Natural Resources has rolled out a Multi-Sectoral Mining Integrated Project (MMIP), which was a precursor to the lifting of the ban.

The project is intended to, among others, regulate and assist Artisanal and Small-scale Miners (ASMs) to improve their operations.

Ghana Is The Next big Tourist Destination