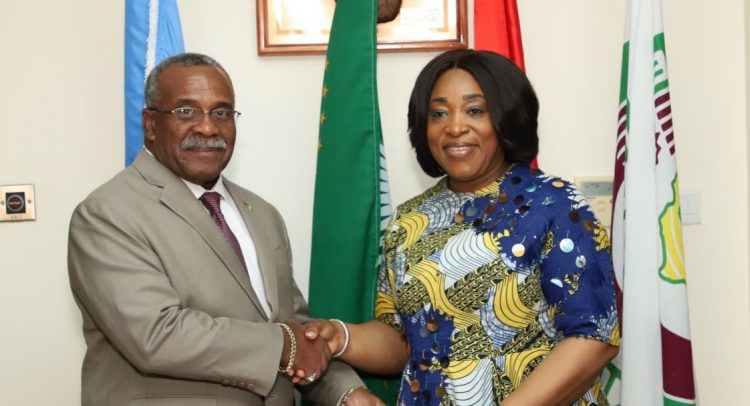 The High Commissioner-designate of the Republic of Trinidad and Tobago to Ghana, Wendell Vincent Carlton De Landro, has presented his open letters to Minister of Foreign Affairs and Regional Integration, Shirley Ayorkor Botchwey.

Also, the Ambassador-designate of Poland to Ghana, Joanna Tarnawska, has presented her open letters to the Foreign Minister.

The two envoys presented their letters on Tuesday, November 5, 2019, at the Foreign Ministry in Accra.

In her remarks to receive the letters, the Minister acknowledged the long-standing historical relations between Ghana and Trinidad and Tobago which dates back to the era of the Transatlantic Slave Trade.

According to her, the relations between Trinidad and Tobago and Ghana have seen a revival over the last few years with the exchange of high-level visits.

She urged that Trinidad and Tobago should take advantage of existing opportunities in Ghana, as well as the conducive environment created by the ‘Ghana Beyond Aid’ agenda, to invest in the country.

The Minister observed that the Republic Bank, which has majority of its shares owned by Trinidadian investors, could be leveraged to facilitate new investment projects in Ghana.

She further expressed hope that necessary steps will soon be taken to implement the bank’s proposed establishment of a petrochemical plant in Ghana, as well as the reported interest in financing the Labiofam factory in Savelugu in the Northern Region.

Madam Ayorkor Botchwey highlighted areas such as petroleum, cocoa production, energy, education, tourism and agriculture as potential areas for cooperation between the two countries which will result in mutual benefit to both sides.

She was hopeful about more bilateral engagements which will strengthen relations between the two countries, citing the meeting of the Permanent Joint Commission for Cooperation (PJCC) proposed for February 2020, as a good starting point.

On his part, the High Commissioner-designate was pleased to note that there were still more areas in which Ghana and Trinidad and Tobago could cooperate as they work to deepen their bilateral relations.

He pointed out specifically the Ghanaian agricultural sector especially cocoa as an area for further cooperation.

He touched on the African Continental Free Trade Area which is headquartered in Accra, the Capital of Ghana and the ways in which Trinidad and Tobago could take advantage of the opportunities it presents.

Meanwhile, in her statement to receive the Poland’s Ambassador-designate open letters, the Minister acknowledged the existing warm relations between Ghana and Poland since the establishment of diplomatic relations between the two countries.

She noted the significant achievements attained by Poland in economic and industrial development and expressed the hope that Ghana would be able to draw some useful lessons from the Polish experience.

However, she observed that trade and investment levels between the two countries remained low.

She therefore emphasized the need for both countries to find more innovative ways to expand their bilateral trade and investment activities.

According to her, since assuming office in 2017, the Government of President Nana Akufo-Addo has embarked on a strong drive to build a resilient economy by initiating programmes such as the One District One Factory (1D1F), the Planting for Food and Jobs and the Free Senior High School.

She expressed that these are all anchored on the Ghana Beyond Aid Agenda which seeks to mobilize resources internally to propel the country’s development.

She impressed upon the new Ambassador to do all within her power during her tenure to bring more Polish investors to Ghana.

On her part, the Ambassador-designate who is expected to present her credentials to President Akufo-Addo on Wednesday, November 6, 2019, pledged to identify new ways in which Poland and Ghana could share ideas and opportunities.

THE PARABLE OF IDEAS