2 Jailed 25 Years For Robbery In Tamale 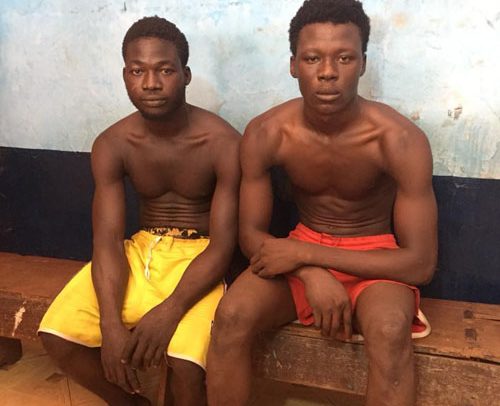 Imoro Abdul Rahman, 25, and Mubarik Abu, 23, who were arrested by the Tamale Police Command for attacking and robbing two ladies have been sentenced to 25 years in prison in hard labour by the Tamale Circuit Court presided over by Twumasi Appiah.

Also, Mubarik Abu was charged with conspiracy to commit crime (count one) and robbery (count two). He was sentenced to 10 years on count one and 10 years on count two. The sentences are supposed to run concurrently. And they pleaded guilty to all the counts against them.

The convicts are serving their sentences at the Tamale Central Prisons.

It would be recalled that the Tamale Police Command arrested two carpenters namely Imoro Abdul Rahman, 25, and Mubarik Abu, 23, for attacking and robbing two ladies in the Northern Region.

The complainants were Foritong Cindy Yenulom, 25, a graduate of the Community Health Nursing Training School at Sakasaka in Tamale. And Anaba Rophina, 26, a past student of Walewale Senior High School. Both reside at Kanvili-Tuunaayili, a suburb of Tamale.

The Northern Regional Police Public Relations Officer (PRO), DSP Mohammed Yusuf Tanko, who confirmed the arrest to DAILY GUIDE, said on 29th July, 2018, at about 11 pm, the complainants were walking home from a spot called King David. When they reached a section of the road at Kanvili-Tuunaayili, the accused persons who were riding on a Luojia motorbike crossed their way.

According to him, one of the victims, Anaba Rophina shouted out to Foritong Cindy Yenulom to run because the accused persons were armed.

The suspects chased Foritong Cindy Yenulom  with a cutlass and collected from them one Infinix Hot Note mobile phone, one Tecno J8 mobile phone and a purse containing cash of GH¢300.

In the process, Imoro Abdul Rahman used the cutlass to slash the palm of Foritong Cindy Yenulom, cutting off her three fingers.

The victims were rescued by someone who was passing by. The person managed to arrest Imoro Abdul Rahman and took him to the Kanvili Chief Palace. He was later handed over to a police patrol team and brought to the station.

DSP Mohammed Yusuf Tanko said Mubarik Abu who took off with the motorbike was later arrested to aid in investigations.

Both accused persons admitted the offence in their caution statements to the police.

Stegue Eyes Collaboration With Stonebwoy, Others