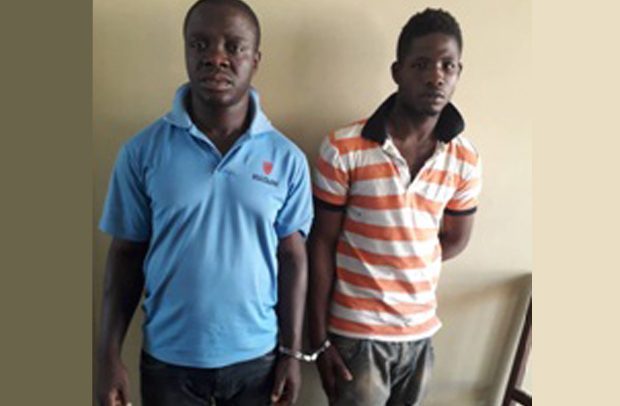 The convicts, Prince, (left) and Mohammed

A SUNYANI District Court presided over by His Worship, Jojo Hagan, has sentenced two persons – Prince Damoah and Mohammed Alhassan – to 12 months in jail for illegally felling trees in the Mpamesu Forest Reserve at Dormaa Ahenkro in the Brong Ahafo Region.

The complainant in the case is the range supervisor of Mpamesu Forest Reserve, Richard Opoku. Prosecuting, Chief Inspector Ernest Donyina told the court that in the night of 19th January, 2019, at about 1:00am, the range supervisor had information that the convicts and their accomplices were in the forest felling trees.

He said the supervisor led a district monitoring team into the forest and saw the accused persons loading sawn lumber into a KIA Rhino truck with registration number GR 7427-14. Having seen the team, they took to their heels but were given a hot chase and the two were arrested and sent to the Regional Police Headquarters for further investigation.

According to the prosecutor, investigation later revealed that one Asuman, a chainsaw operator who is at large, fell ‘wawa’ and ‘edinam’ trees and processed them into lumber valued at GH¢17,696.70. He later hired the services of the convicts, Mohammed Alhassan, the driver of the KIA truck and Prince Damoah, a car mechanic and others to go and convey the sawn lumber to his house.

He said investigation later found Mohammed Alhassan with 80 pieces of sawn lumber valued at GH¢10,246.93. As a result, they were charged with the offence of entering into a forest reserve and carrying pieces of lumber by non-mechanical means without obtaining written permission from the Forest Service Division, contrary to section 17(2) of Timber Resource Management Act 547 amended by Act 617of 2002.

The accused persons pleaded guilty but said they were not aware the area was a forest reserve. Having listened to their plea, the judge sentenced them to six months each in prison.

Brong Ahafo Regional Manager of the Forestry Commission Dr Ebenezer Djagbletey expressed satisfaction with the sentence and said he hoped it would serve as a deterrent to residents of the area. He asked the police to step up their investigation to arrest the main culprit – the chainsaw operator.