3 Arrested With ‘Wee’ At Savelugu 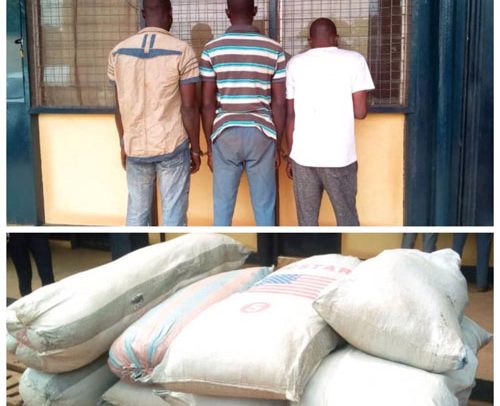 Police in the Northern Region have arrested three persons suspected to be Indian hemp dealers at Savelugu.

Information gathered by DGN Online indicates that the police received a tipoff that some five persons were in possession of a substance suspected to be Indian hemp popularly called wee.

The suspects were on motorbikes transporting the substance from the North East Region into the Northern Region.

Police personnel laid ambush and when the suspects got to the checkpoint they were apprehended.

The Northern Regional Crime Officer, Superintendent Otuo Acheampong, who confirmed the incident to DGN Online, said two out of the five suspects were able to escape arrest while three are in police custody.

According to him, the police intercepted 13 and half sucks of dried leaves suspected to be Indian hemp and five motorbikes.

He indicated that the suspected admitted to be the owners of the substances during police interrogation.

Superintendent Otuo disclosed that the suspects have been charged with possession of narcotics substances without authority.

He said the suspects would be arraigned before court after investigations.

Dangote Refinery To End Imports Of Petroleum Products To Africa