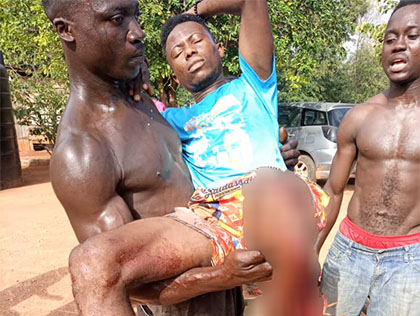 Three persons have lost their legs in a motorcycle accident at Faaso Bator in the Eastern Region.

The accident, involving an unregistered Apsonic tricycle and an Apsonic motorcycle, occurred last Tuesday afternoon and the victims were rushed to the Tease Presbyterian Health Centre for attention.

Upon learning about the accident, a police team proceeded to the health facility where it met the victims, Mumuni Yakubu, 27, Derrick Narh, 16 and Ebenezer Obiri, 20, on their sick bed.

Two of the victims, 16-year-old Derrick Narh and Ebenezer Obiri had mutilated legs.

Mumuni Yakubu also spotted a lost leg which was later found at the accident scene by a police team.

After an initial first aid treatment, the victims were referred to the Donkorkrom Presbyterian Hospital for further treatment.

On the same day, DAILY GUIDE learnt about how the rider of the Apsonic tricycle, a certain Daniel Djomoah, aged 21, reported at the police station complaining about bodily pains and was issued with a police medical form to go to the Tease Presbyterian Hospital for attention.

When the police proceeded to the accident scene, they found the unregistered Apsonic tricycle and unregistered motorcycle in a bush close to the road.

The amputated leg of Mumuni Yakubu was found at the scene, which suggested that the victim lost the limb in the course of the accident.

The leg was photographed by the police and taken to the Donkorkrom Presbyterian Hospital morgue for preservation and the tricycle and motorcycle taken to the police station to await examination by officials of the DVLA.

The accident appears to have been caused by a head-on collision between the tricycle, also known as Aboboyaa and the motorcycle, both unregistered.

The accident has been attributed to careless and inconsiderate riding, leading to negligently causing harm.