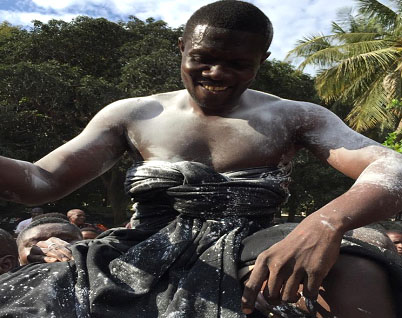 The people of Wenchi in the Bono Region could not hide their joy as they took to the streets to jubilate after the Acheamenhene, Nana Damoa Koasane Adisi Kofabae IV, announced Nana Kwaku Abrefa Damoah from the Ahenfie Yefri as the new Paramount Chief of Wenchi Traditional Area.

Nana Abrefa Damoah was nominated by the Queenmother, Nana Atoa Sramangyedua, who happens to be the grandmother of the new Omanhene.

After presenting the new Omanhene to the kingmakers, chiefs and elders of the stool, all of them accepted his nomination and thanked the queenmother for giving them “the right choice”.

Accepting his nomination, Nana Abrefa Damoah promised to work hard to settle all outstanding chieftaincy issues in his domain. He said as a young man, he would make sure he works in unity with the youth of Wenchi to bring development to the area which lacks development due to protracted chieftaincy disputes. He also appealed to the elders and kingmakers to give him the necessary support so that his reign would be successful.

In his view, Wenchi, the birth place of the late Ghanaian Prime Minister, Professor Kofi Abrefa Busia, deserves more as far as development is concerned. He noted that chieftaincy problems had stalled the development of the area.

On her part, Nana Atoa Sramangyedua admonished the new Omanhene to respect his elders and work together with them to engender peace in the area.

She also took the opportunity to appeal to the New Patriotic Party (NPP) administration to quickly revamp the Wenchi Tomato Factory which has gone defunct for so many years.

She said with the introduction of 1D1F, it would not be out of order for the government to find a strategic investor to take over the factory so that the teeming youth of Wenchi and its environs would have something profitable to do.

She also mentioned other laudable initiatives like the Planting for Food and Jobs which she said would help more people to find jobs.

The new Omanhene was later carried on the shoulder and paraded on the streets of Wenchi.

Corruption Or Plain Thievery In Ghana?