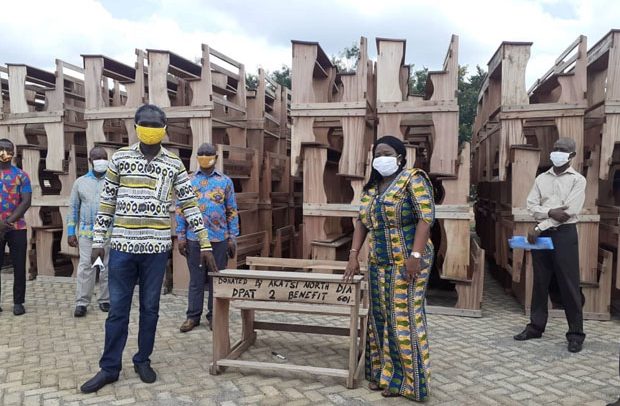 Thirty eight schools in the Akatsi North District of the Volta Region who hitherto did not have desks to use in their classrooms will now be able to do so, thanks to the district assembly.
Most of these schools have over a thousand students not having the best seating conditions with some having to perch and others improvising with all sorts of seat-like material to enjoy teaching and learning.
However, having scored about 98 percent during the 2017 District Assemblies Performance Assessment Tool (DPAT) -II, the Akatsi North District Assembly received some funds as reward to undertake some pressing needs of the assembly.

The DPAT a form of assessment that evaluates the performance of Metropolitan, Municipal and District Assemblies (MMDAs) based a number of factors, including compliance with the existing legal, regulatory and policy framework.

A good performance affords the Assembly the opportunity to receive some investment grant to fulfill some of the pressing needs of the assembly; be it short, medium or long term.

The District Chief Executive (DCE), Dr. Prince Sodoke Amuzu noted that on receiving the grant, the assembly thought it wise to procure dual desks that can cater for 1200 of the seating needs of schools in the district. He said although there was still a deficit of about 276, the Assembly was working hard to ensure that it is dealt with.

He added that apart from the desks there were other investments being made to improve education in the area.

Some of them include construction of six and three-unit classroom blocks for about 16 communities who did not have any, but had children who needed to be schooled.

More so, the Assembly, donors and MP are also collaborating to construct a number of Kindergarten blocks for the district.
He commended the Education Directorate for their hard work in helping to improve student performance.

He recounted that in the past, results from basic and secondary schools in the area was not encouraging, however that has changed.
For the first time in a long period, the Ave Senior High School who sat for the 2019 WAEC examinations had aggregate ‘A’ in both Mathematics and English language. More so, majority of the basic schools recorded 100 percent pass rate, enabling all a lot more students to advance to Senior High Schools.

The MP, Peter Nortsu-Kotoe commended the DCE, Dr. Amuzu and the assembly for not waiting on government as others have done to provide such critical needs for students. He also urged the education directorate to ensure the schools come-up with a maintenance plan to ensure the desks are always in perfect shape.

The Education Director of the District, Pailina Slyn Eworde expressed gratitude to the Assembly and the MP for their constant support towards education improvement in the area. She assured that the desks and other education support will be put to good use adding that a lot more work will be put in, to ensure the academic performance improve even more.