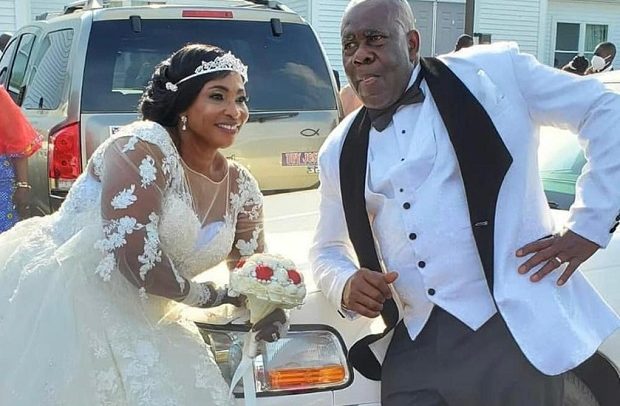 Actress Rose Mensah, known popularly as Kyeiwaa, and her husband, Michael Kissi Asare, sealed their union with a white a wedding ceremony in Worcester, Massachusetts on Saturday, July 25, 2020.

The ceremony was attended by a number of her relatives and friends.

The Kumawood actress trended in January 2020 after reports of her remarrying under the laws of United States of America went viral.

The 57-year-old actress and Michael Kissi Asare went to court to get married at the time.

It, therefore, took them six months to organise a white wedding to seal their marriage due to constraints by the Covid-19 pandemic.

This is, however, the second time she has said ‘I do’ after her first failed marriage in 2015.

She was married to Kumasi-based spare parts dealer, Daniel Osei, but their union lasted not more than five days.

She returned her ring and drinks after she discovered that Osei was already married to another woman.

She was accompanied by her father and a number of Kumawood actors and actresses to annul the marriage.

In an interview after the annulment, Kyeiwaa said she was aware Osei had a child with another woman but she didn’t know he was married to her and since she didn’t want to be a second wife, the right thing to do was to annul the marriage.

After the divorce brouhaha, she has been in and out of Ghana, predominantly domiciled in America.