6 Crushed To Death At Atibie 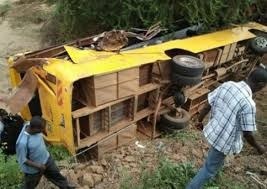 SIX persons including a child and relatives of Eastern Regional Secretary of NPP, Jeff Konadu have met their untimely death in a fatal accident on the Kwahu Atibie- Nkawkaw road in the Kwahu South Municipality of the Eastern Region.

he deceased as gathered were returning from funeral logistics after holding thanksgiving and memorial service of late brother of Jeff Konadu held in the Afram Plains South District when the incident occurred on Tuesday evening.

According to reports, the suspect driver, Fred Amankwah, 26, was in charge of Rhino truck registered GW 5738-19 with nine passengers onboard and loaded with chairs, canopies, and some spinning machines from Forifori in the Afram plains towards Accra. 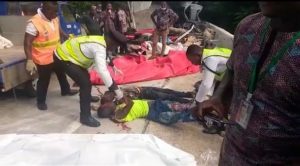 On reaching a section of the road whilst descending the Kwahu mountains near Nkawkaw, the driver alleged that the brakes had failed to respond to the demand of retardation as he applied. The vehicle ran against the wall barricade by the nearside edge of the road and fell on its side.

The driver lost control of the steering wheel somersaulted and crashed at the roadside killing the four persons instantly while two died later at the hospital. 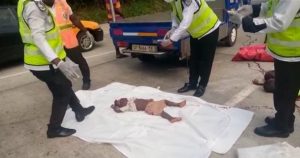 But Ramatu and Blebor Owusu were pronounced dead soon on arrival and their bodies deposited at same Hospital mortuary.

Three unidentified male adults ages between 27, 42, and a 2-year old respectively male child who also died on the spot were conveyed and deposited at Nkawkaw Holy Family Hospital mortuary pending identification and autopsy.

The other injured persons are still on admission at Atibie Government Hospital for medical treatment at the time of filing this report.

Meanwhile, the accident vehicle was towed to Nkawkaw Central police station for examination and testing, as an investigation is ongoing.