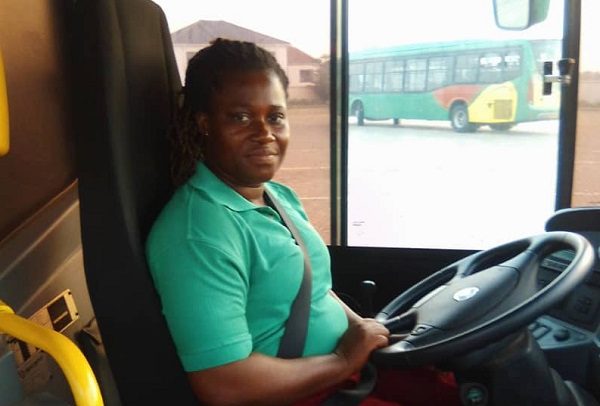 Grace in her Scania bus

Scores of women are now part of the drivers on the roll of the Rapid Bus Transit otherwise known as Aayalolo in Accra.

When I chanced upon one of them behind the steering wheels of a bus which ordinarily would have had a male driver in charge, I became fascinated.

It was during the Hajj 2022 operations and she was in charge of one of four buses assigned the role of conveying arriving pilgrims from the tarmac to the Hajj Village to undergo arrival formalities and to claim their luggage.

I could not stop admiring her at the steering whees and controlling the long bus with so much ease and confidence, and I longed for an interview right away.

“I am Grace Amartekah from the Amarche We in Ga Mashie. Five years ago my husband who is a teacher picked a bus from Amasaman and saw an advertisement asking for interested females to apply to be trained as drivers for the long buses,” she told me.

Fate was in motion. She was among 400 women who turned up at the Dzorwulu office of the transport company to be considered for the opportunity.

“We were called for an interview and examination and eventually only 70 of us remained to continue the process.

“We went to a technical school at Kaneshie where we were taken through theory classes for two months, following which we proceeded to the Free Zone area where we went for the practical aspect of driving the long bus for four months,” she said.

Out of the 70 trainees, only 54 were licensed in category F, she said. “I can drive an articulated truck. I drove one of the Scania buses which were sent to Kumasi. I spent four or so hours for the trip,” she disclosed.

“At the DVLA where we were tested, we drove through the Tema township. Some failed the practicals yet passed the theory. The classroom examination entailed knowledge of road signs,” she added.

As to how she manages road rage, she said, “even though as a driver you must comport yourself when you are behind the driving wheels, sometimes it is just too much. Some motorists can be so irritating, but one must be able to subdue one’s temper.”

To women, she said “what men can do women can do too. Women should aim high and they can make it.”

As to how she manages work and the home, she said, “My husband is supportive and took care of our five-month-old baby when I was undergoing training, which in all took six months.”

She is currently attached to the Ghana Airports Company Limited and conveys workers to their destinations. “At first some of the workers were apprehensive, but after experiencing my driving, they now prefer me at the wheels,” she indicated.