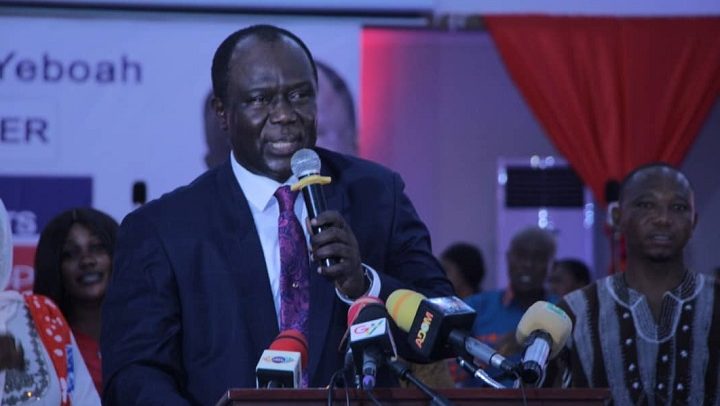 The National Treasurer of the ruling New Patriotic Party, George Kwabena Abankwa-Yeboah who is vying for the NPP national chairmanship position has emphasized the need to display a high grade of mutual respect and unity before, during, and after the contest.

According to him, unity and mutual respect towards other contestants as well as towards all members of the party is his number one priority.

Speaking at the launching of his campaign in Koforidua, the Eastern Regional capital, he calls for Unity as he declares his intention to contest for the National Chairmanship Position.

Mr. Abankwa threw a challenge to all contestants to have a clear point of decent and unifying campaign messages to ensure unity, mutual respect and decorum come 2022 when the internal campaign kicks start in earnest.

“I am not going to embark on a campaign of acrimony, vilification, animosity, blackmailing and name-calling that would tear us apart, because, after the elections, we need to come together as one solid family to secure a resounding victory in 2024’’.

‘’All of us must show mutual respect to one another to prove to our opponents that there is a binding chord of unity amongst us so that Ghanaians would watch and say yes, this is a seriously determined party’’.

‘’Needless to say UNITED WE STAND BUT DIVIDED WE FALL. So long as we want to break the 8-year tenure cycle and jinx, we must present a strong undividable front to face 2024’’.

Mr. Abankwa-Yeboah who has repeatedly advocated for unity in the party postulated that he is not going to wage any divisive and dirty campaign because if he wins, which is most likely, he would like to work hand in hand with his fellow contestants to plan and execute policies to surmount the big hurdle of 2024.

He maintains that anytime the NPP is in government, it can put the country in the right direction but due to the NDC’s ability to peddle falsehood and their deliberate misinformation to Ghanaians, there is always a change of government and things begin to worsen again because of the NDC’ inability to continue the good policies put in place by the NPP.

“I believe that if all party members hold on to the party structures and respect the constitution of the party from the polling station to the national level and the party’s proactiveness to resolving all internal wranglings and misunderstandings as early as possible, then there will be an assurance of victory in 2024,” he added.

He further cautioned all party leaders not to discriminate or manipulate anyone who intends to contest for any position in the party, saying equal opportunity should be given to such persons after which whoever wins must be supported and whoever loses must accept defeat and together move the party forward.

Ghana In Right Direction -Finance Minister ..No Going Back To IMF