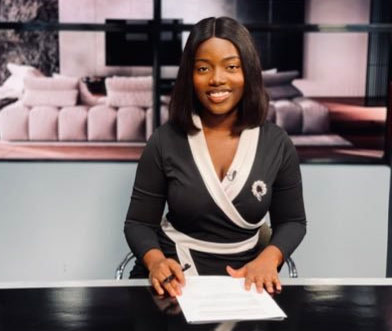 This nomination comes a year after she first aired on the 6:30pm news broadcast on the Tv channel.

In a social media post, the promising media personality wrote: “Today marks a year of my Tv debut as a News Anchor on DGN. It has been an amazing year learning on the job with little to no experience. My growth within a year is nothing short of beautiful. Couldn’t be more grateful to God for this.”

Earning a nomination just a year into her media journey is indeed no small feat and it’s nothing but high hopes for her progress.

Abena Soreno is a newscaster on DGN TV and a radio host for Guide Radio 91.5FM’s morning show, ‘Up And Running’. She graduated from the University of Ghana with a degree in Political Science and has always had dreams of working in the media. She’s on social media as Soreno_ on all platforms.

Vote Abena Soreno Nyamkyera for Discovery of the Year for the RTP Awards. Dial *447*111# and enter code 55 to vote.