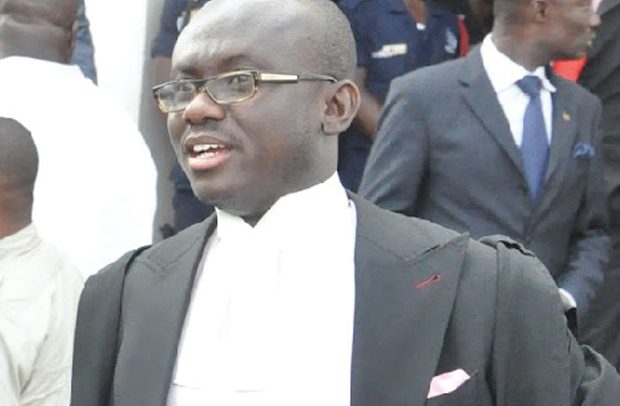 Deputy Attorney General, Godfred Yeboah Dame, has reiterated that the state’s position that the Receiver of the defunct UT Bank and embattled businessman Alfred Woyome have connived to frustrate its efforts to retrieve the GH¢51.2 million wrongly paid to the businessman as judgement debt.

Mr. Dame reiterated the allegation when the Receiver of defunct UT Bank, Eric Nana Nipah, mounted the witness box at the Supreme Court to lay claim to two residential property at Trassaco Valley Estates which he claims Mr. Woyome sold to the bank and used the other as collateral for a loan.

The state is struggling to sell some identified property of the National Democratic Congress (NDC) financier, which the Receiver of UT bank claims to have bought from the businessman, and another used as collateral to secure a loan in excess of GH¢9 million.

The property identified by the state for confiscation to recover the money are houses located at Trassaco Valley Estates and Accra New Town.

There were claims that some of the property do not belong to him, which thwarted efforts by the state to confiscate them.

The Supreme Court, presided over by a single judge, Justice A.A Benin, ordered oral arguments from embattled businessman, Alfred Agbesi Woyome, UT Bank, the Attorney General and one Abena Akyea on matters relating to some property belonging to the businessman.

The Receiver of UT Bank, at yesterday’s proceeding, told the court that he will rely on his witness statement to the apex court in which he claims the bank acquired the property from Mr. Woyome on April 5, 2013 and May 13, 2014 respectively.

He averred that the property at Accra Newtown was used by the businessman as collateral to secure a loan in excess of GH¢9 million from the bank.

Mr. Nipa further stated that Mr. Woyome’s company is yet to repay the money, thereby making it difficult for the bank to pay its depositors and other creditors.

Mr Dame, during the cross examination of the Receiver, pointed out the inaccuracies in UT Bank’s claims, insisting that they were instruments of deceit to frustrate efforts by the state to execute the judgment of the Supreme Court.

Mr. Dame was able to prove that there is no deed of transfer between Woyome and UT Bank, which guarantees the bank the right to lay claim to the property in question.

The documents filed by the Receiver of UT Bank in support of the bank’s claims of the property are land title certificate, which has not been signed by any official of the Lands Commission and does not have a valid stamp.

Interestingly, all documents filed by UT Bank, including the land title certificates and site plans of the said property, are all in the name of Mr. Woyome.

In a bid to further lay claim to the two residential property at Trassaco Valley; plot numbers 260 and 267, Mr. Nipah denied the Deputy AG’s assertion that Mr. Woyome used them to secure a loan in excess of GH₵9 million in 2014.

He claimed although the two property at Trassaco Valley which were used as securities for the loan have been vaguely described, he is very sure they do not refer to those on plot numbers 260 and 267.

Asked whether Woyome has been able to honour the 24-month conditions of the loans he took, the Receiver answered in the negative, adding that Woyome has been in default and the matter has been referred to external solicitors to retrieve the money.

Mr. Dame put it to the Receiver that there has not been any recourse to sell off any of the property to retrieve the money he took as loans because there was no proper mortgage between Woyome and the bank.

“I’m suggesting to you that the purported transfer of plot numbers 260 and 267 is a collusion between Woyome and UT to shield the property of Mr. Woyome from execution,” Deputy Attorney General asserted.

Mr. Dame also suggested to the Receiver that he was untruthful to court when he said the keys to the property had been in the possession of UT Bank since August 2017 because as at September 2017, Mr. Woyome was still in possession of those property when state officials stormed there.

“I am putting it to you that the evidence you just gave is false as part of your efforts in preventing the state from selling the property,” Mr. Dame pressed but Mr. Nipah, who said his testimony was “absolutely true.”