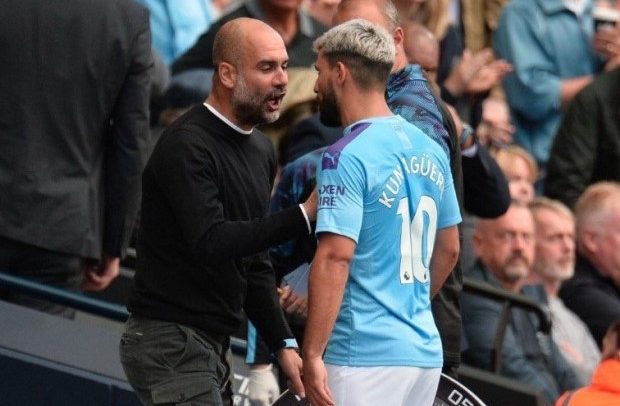 Pep Guardiola has clarified the situation following his bust-up with star striker Sergio Aguero on the touchline during Manchester City’s 2-2 draw with Tottenham.

The incident occurred on 66 minutes after Aguero was replaced by Gabriel Jesus.

Just 10 minutes earlier, Lucas Moura had equalsied from a corner for Tottenham to make it 2-2 – something Guardiola claims that Aguero blamed him for.

After the game, the Spaniard explained why the pair had fallen out but insisted that their relationship hadn’t been harmed by the incident.

“I wanted one on one movement. He thought I was upset with him.

“I am sometimes exaggerated on the touchline but few times am I upset with the players.

“I was a football player, I know what it is like to be in there. Emotion is part of our game. We talked after and during. He’s a guy I love a lot.”

As Aguero was substituted he appeared to make a comment as he walked past Guardiola in the dug-out.

The striker’s words prompted a furious response from Guardiola, who turned around and began shouting at the striker, who responded with a verbal volley of his own.

The pair continued to trade verbal blows for 44 seconds, with Aguero refusing to sit down as he shouted at Guardiola.

Eventually, City’s assistant coach Mikel Arteta was forced to intervene and ushered Guardiola towards the touchline.

However, the City boss looked to have had the last laugh when Jesus fired home inside the 18-yard box, deep into injury time.