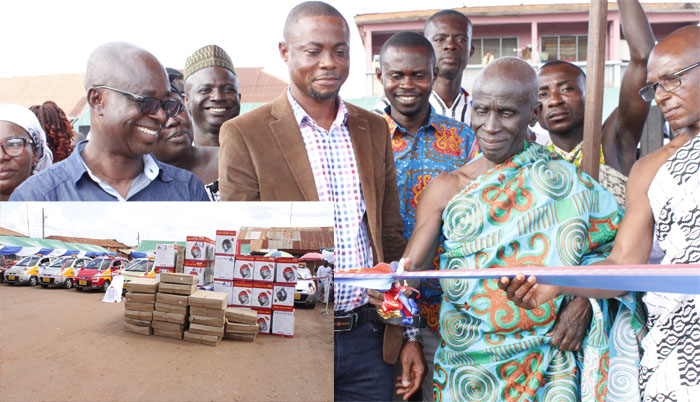 AHAFO REGIONAL Minister and Member of Parliament for Asunafo North, Evans Opoku Bobie yesterday put similes on faces of some youth in his constituency after he distributed taxis, tricycles and hair dryers to them to work with to make a decent living.

Seven taxi drivers, a tricycle rider and 60 hairdressers from Mim and Goaso were beneficiaries of project.

Under the agreement, the taxi drivers are to work and pay and later own the cars while the hairdressers got the dryers for free.

At a short presentation ceremony at Mim, the minister said moneys for the purchase of the equipment were raised from savings he started when he became an MP and made it clear that it was not part of the MP’s Common Fund.

“The drivers are to work and pay because more of the youth must also get to work and feed their families. The proceeds from it will be used to purchase more for others,” he said.

He told the people that job creation is a priority of the Akufo-Addo-led NPP administration and the introduction of the initiatives like Nation Builders Corps (NABCO), Planting for Food and Jobs, the Ghana Card registration among others are being used to make the youth employable.

The Minister debunked an assertion by former president John Dramani  Mahama who visited the region recently  that President Akufo-Addo  has collapsed the once vibrant timber company, Ayum company Limited.

“That is a lie. If Mr. Mahama has forgotten, let me remind him, that in late 2015, some chiefs from Mim visited him (Mahama) to plead for government intervention in the company.  By that time, where was president Nana Addo, he quizzed?  Rather what Mahama destroyed is what President Akufo-Addo is resuscitating.”

He assured the people that government has directed the Minister of Trade and Industry Alan Kyeremanten to come out with a time table for the re-opening of Ayum Company Limited.

A hairdresser, Augustine Mensah who benefitted from one hairdryer was thankful to the minister for the gesture irrespective of their political affiliation, saying “We were approached as an association but not on political lines.”