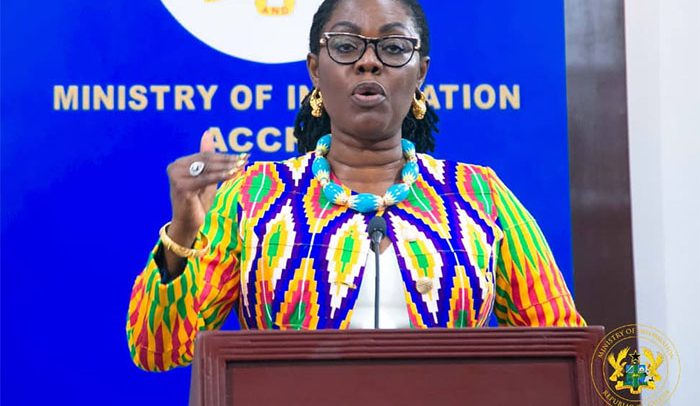 The dust generated by the plans to reduce the Digital Terrestrial Television (DTT) channels of the national broadcaster, Ghana Broadcasting Corporation (GBC), from its current status of six to three has subsided as President Akufo-Addo orders Ursula Owusu-Ekuful to suspend the move.

A directive issued by the Ministry of Communications asking the state broadcaster to reduce its six operating digital television channels to three as contained in a letter addressed to the Director-General of the GBC dated June 26, 2020, triggered a flurry of disagreements from varying interest groups, including the Ghana Journalists Association (GJA), the state broadcaster, among others.

The Minister of Communications, Ursula Owusu-Ekuful, said the directive which was to be implemented within 60 days was to ensure that there is space on the DTT platform which is currently full with 40 operating channels.

Currently, the state broadcaster operates six of those 40 digital channels, namely GTV Sports+ (a channel for sports), GBC 24 (a 24-hour news TV channel), GTV Live (a religion and culture channel), GTV Govern (a governance channel), Obonu TV (a channel for the people of Greater Accra) and Ghana Learning Television (a channel established for tutoring JHS and SHS students during the Covid-19 pandemic).

GTV was expected to merge these channels in line with the directive.

The letter also had said GTV’s channels would be returned when work on the planned expansion of Ghana’s DTT network is completed.

“Kindly note that upon the planned future expansion of capacity on the network, which has been delayed due to the current pandemic and the uncertainties generated in global supply chains, you will be allocated additional channels,” the letter stated.

Members of Parliament (MPs) of the opposition National Democratic Congress (NDC), some civil society organizations and management and board of GBC itself, had cause to protest against the decision describing it in various terms.

Responding to concerns over the directive in Parliament, the minister, however, explained that the move was to free up space on the DTT platform whose scheduled expansion has been held up by the Covid-19 pandemic and the uncertainties generated in global supply chains.

As it is, she said, it would be impossible for the state to broadcast urgent communication to citizens because the DTT platform is full.

A statement from the Presidency signed and issued yesterday by the Director of Communications, Eugene Arhin, said, “The President of the Republic, Nana Addo Dankwa Akufo-Addo on Thursday, 23rd July 2020 directed the Minister of Communications, Honourable Ursula Owusu Ekuful, MP, to suspend the implementation of the directives given to the Ghana Broadcasting Corporation (GBC) in connection with the reduction of GBCs channel on the Digital Terrestrial Television (DTT) platform pending further consultation with stake holders.”

Earlier, the regulator, National Media Commission (NMC), held an emergency meeting in Accra to consider issues relating to the subject having examined a petition from the GBC and an explanation from the Information Minister.

The NMC was quick to, however, add in a statement authored by its chairman, Yaw Boadu-Ayeboafoh, that “the Commission believes that any discussion on the matters at stake should be situated within the overall context of the 1992 Constitution of the Republic of Ghana”, especially referring its mandate of protecting the interests of the state broadcaster and media in general from political interference.

Production and transmission, the NMC pointed out, combine to constitute the broadcast medium with the DTT platform serving as the new technology for broadcasting transmission and should, therefore, be treated as media to enable it to benefit from all the freedoms guaranteed the media by the 1992 Constitution.

The NMC added that being a state-owned institution, GBC must be covered by the constitutional provisions on the state-owned media.

In the opinion of NMC, it would be unhelpful to democracy to leave the control of the gateway to public communications in the hands of a Minister of State, adding in its statement that “allowing politicians to control the gateway to public communication would introduce vulnerabilities into the constitutional firewalls of free expression in Ghana.”