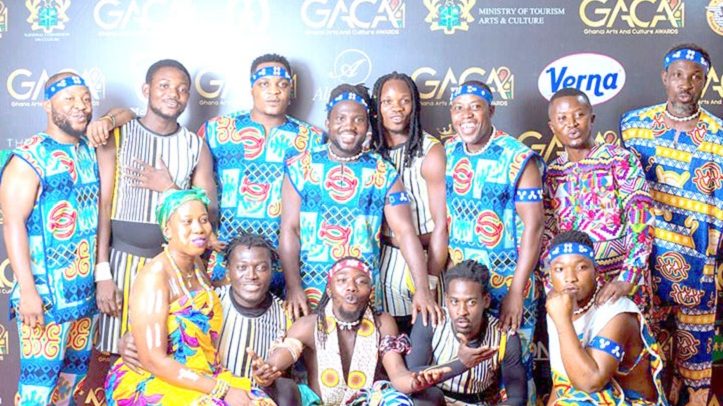 There is little debate in traditional music and dance circles that the Akuma Dance Ensemble based at Nungua in Accra is one of the outfits that have gone through a useful maturation process over the last few years.

Apart from winning the Outstanding Cultural Group of the Year trophy for 2021 at the Ghana Youth Entertainment Awards (GYEA), its thrilling presence was felt at several important gigs in the year in question.

It impressed audience with performances at events such as the Alewah Festival of Arts, UN Refugees End Violence Against Women programme, Ghana Free Zones Board Summit, send-off party for Netherlands Ambassador, the Ghana Arts and Culture Awards (GACA) awards event and Ghana Independence Day Celebration at Junction Mall in Accra.

He has been playing different types of traditional drums for over 16 years and says that experience has imbued him with wonderful skills and command over any drum he plays.

“The master drummer is a key component in the work we do. He influences the flow and pace of the items offered. Knowing the type of event on hand informs the master drummer on what types of rhythms to initiate at all times to suit the show,” Kodjo says.

The Akuma Dance Ensemble were the winners in the Traditional Dance Group of the Year at the 2020 Ghana Arts and Culture Awards (GACA). The group’s master drummer said it was another indication that they’ve been making steady progress.

“In most music-related activities, there are standards and standard-bearers. Our big dream is to be in the latter category so everyone would appreciate how hard we have been working and what new avenues we can help open for emerging groups as well,” he disclosed.

Drummer Kodjo’s contention is that there’s enough space in the traditional music and dance environment for practitioners to collaborate and help each other sharpen their skills to impress the world.

“We should all join in the effort to enrich, entertain and inspire lives with our creative abilities. Then we can all see ourselves as winners providing immeasurable service to mankind,” he added.

To drummer Kodjo, what would gladden the hearts of Akuma Dance Ensemble members more than anything else this year is for them to perform at some major festivals across the world to promote Ghanaian music and culture.