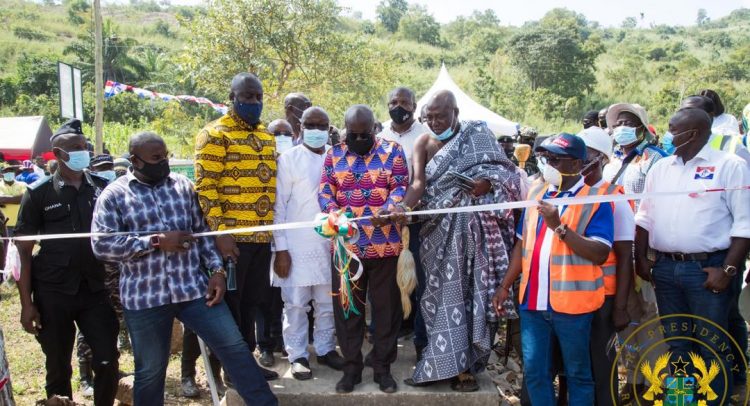 It was all smiles and jubilation today when President Akufo-Addo commissioned the Tsatsadu mini hydro electricity plant.

The project which is located in the Alavanyo district of the Volta region, is set to add 45kilowatts of power (electricity) to the national grid.

The jubilation and excitement for the project is due to the delay in the project which was originally initiated 15 years ago (2005) under former President Kufour’s administration.

The Alavanyo Paramount Chief, Togbe Tsedze Atakora VII, who corroborated the delay recounted that “this project initiated a long time ago. It has taken so many years (15). We thought it will not come off, but today we have witnessed it.”

According to him, the realisation of the project is a sign of good leadership. He prayed the President to ensure the road leading to the project is completed promptly since the area is fit for tourism and research purposes.

President Akufo-Addo in his address recalled how the previous Kufuor-led NPP administration discovered 21 similar water bodies and started to develop them into mini hydro projects.

Unfortunately, the idea was abandoned by the NDC government just as other good initiatives that stalled.

He assured that the completion of the Tsatsadu mini hydro plant in Alavanyo marks the beginning of the development of the others including the Wli waterfalls. He said the road to the project will be completed in no time.

The CEO of Bui Power Authority, Fred Oware said the fact that entire project was constructed by Ghanaians is proof that when given the necessary support and resources “our engineers can achieve alot.”

He announced that the Authority is working a several renewable energy projects, including solar to feed into the national grid.

The 45kW Tsatsadu Micro Hydro Generating Station, situated on the Tsatsadu Waterfalls, is a run-of-river scheme, which does not require the formation of a reservoir to operate.

It consists of a concrete diversion weir, an intake structure, diversion channel, a forebay, steel penstock, a powerhouse and a transmission line which ties the electricity generated into the local distribution grid.

The weir diverts part of the river flow through an intake channel into the diversion channel.

The diverted water goes through a 300mm diameter penstock to the base of the hill where the powerhouse, which houses the turbines and the generator, is located.

The water drives the turbines and flows out through the tailrace channel and back into the downstream of the waterfall.

The implementation of the 45kW Tsatsadu Generating Station was co-funded by the Danish and Chinese governments through the Renewable Energy Technology Transfer (UNDP-RETT) Project. The Bui Power Authority collaborated with the United Nations Industrial Development Organization (UNIDO), the International Network on Small Hydro Power of China (IN-SHP) and Ghanaian Energy Sector Agencies to execute the project.