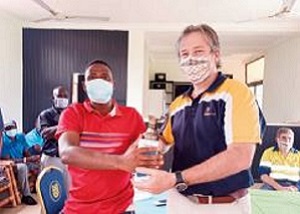 Kwame returned a total standard scratch score (SSS) of 225 over three days to meet the benchmark qualification score of plus nine (+9) in the just ended 2021 amateur pro-golf qualifier tournament in Damang.

The competition, originally scheduled for four days, was changed to three after the first day on Wednesday was rained off.

There were total of 25 registered scratch golf players from the various golf clubs in the country to compete but Kwadwo Kyei from Royal Golf Club pulled out.

Tournament Director for PGA of Ghana Akwasi Prempeh had earlier made it known to all the participating players that only five out of the number with plus nine will qualify to the pro level but only Kwame came to the party.

James Akwaboah, who represented Nsuta was eight strokes beaten by the course to place third.

Royal Golf Club’s Michael Boateng came forth with 234 over three days, with the first three positions taking home samsung galaxy mobile phones, and the winner adding  a trophy to his goody.

Alfred was full of thanks to the organisers, the PGA, and Gold Fields for making the opportunity available to play and qualify.

General Manager of Damang Gold Fields, Michael Van Der Merwe, revealed he was not too surprised only one made the mark due to the difficult nature of the Damang Course.

Kwame will later go through six months practical training to become a full member of PGA of Ghana.