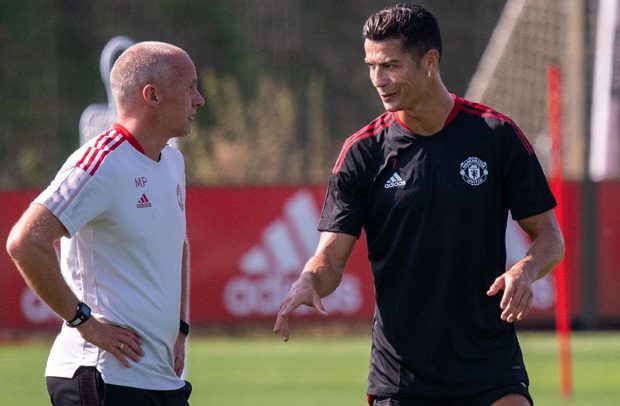 The Norwegian boss wouldn’t say whether Ronaldo will start his first game for the club in 12 years, but praised the 36-year-old Portugal star for his fitness.

Ronaldo wants to be in the starting line-up against Newcastle after training for four days at Carrington following a £19.8million move from Juventus, but Solskjaer insists he will make the final decision.
“He’ll definitely be on the pitch at some point, that’s for sure,” said the United boss. “He’s been having a good pre-season with Juventus, he’s played with the national team, and had a good week with us.

“We’ve got mutual respect for each other but he knows I’ve got to make the decisions when to play him and when not to play him. It’s my job to manage him.

“I want to get the best out of Cristiano and that comes from communication. We spent a few years together at the club and we know each other. He doesn’t need me to tell him what to do, he’s already had the determination and desire to be the best.

“Ryan Giggs played until 40 and I wouldn’t be surprised if Cristiano ends up with the same age as Ryan.

“Cristiano coming back in, just the way he’s conducted himself this week, we know what he’s achieved in his career but he wants to achieve more.

“He’s lived his life with the discipline of a top professional. Ever since I came here, he was the first one who did the preparation well – every day 45 minutes before the training session and we started looking at this kid. He’ll have an effect on all of the players.

“It’s like bringing in Rapahel (Varane), he’s brought a winner’s mentality. There’s no place to hide with winners like them, you can’t go in 95 per cent focused. It’s been great having him in.”

Solskjaer also praised Ronaldo and Edinson Cavani for the way they have handled the five-time Ballon d’Or winner reclaiming the iconic United No.7 shirt.

Cavani wore it last season but will switch to No.21 – his number for Uruguay – following Dan James’ move to Leeds.

“Edinson has been remarkable, and played really well last season,” added Solskjaer. “Cristiano speaks with Edinson and to pass up his shirt shows the respect he’s got for Cristiano and respect the other way. They are two top professionals, players, and human beings.”

Jadon Sancho is also available to face Newcastle but Solskjaer confirmed that Scott McTominay, Alex Telles and Dean Henderson are unlikely to feature after recovering from injury and illness.

DOL Clubs Benefit From ‘Betway Up’