DOL Clubs Benefit From ‘Betway Up’ 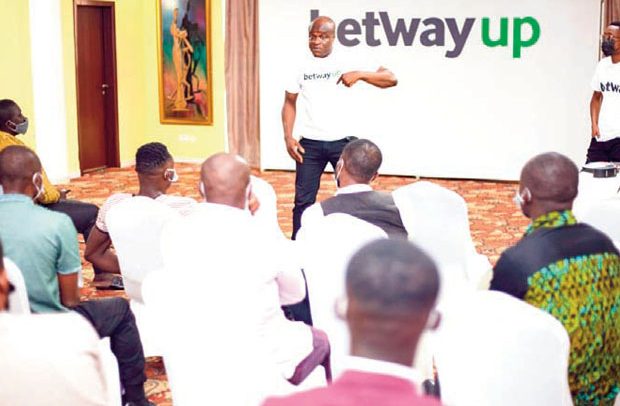 A resource person taking participants through some of the topics

Ghana’s leading sports betting company, Betway, has teamed up with the Ghana League Clubs Association (GHALCA) to organise a seminar for Division One League (DOL) teams in the Northern Sector.

The seminar, which is an initiative to equip clubs with the needed knowledge from various stakeholders, forms part of ‘Betway Up’, a community support programme being run by Betway Ghana.

The event was undertaken in sessions with resource persons lecturing on some topical issues about how clubs can enhance their operations to maximise positive results both on and off the pitch.

The programme took place at the Golden Bean Hotel, Kumasi, and drew participants from Division One League Clubs within the Northern Sector of the Ghana Football map.

The session was opened by GHALCA Chairman Kudjoe Fianoo, who touched on the essence of the gathering. The veteran football administrator urged the participants to take the lectures seriously and also apply the knowledge shared to benefit from it.

Subsequently, Ghanaian football legend Stephen Appiah, who doubles as a Betway ambassador engaged the participants; encouraging them to keep pushing beyond their limits to excel at their respective clubs.

The lectures started with revered Ghanaian Football Coach Mas-Ud Didi Dramani who took time to educate participants on scouting and what it holds for the game in the short, medium- and long-term future.

Participants were taken through the various aspects of scouting and the respective indicators and predictors to consider before embarking on such an exercise.

Former national team coach, Didi Dramani encouraged clubs to be more scientific in their approach towards identifying talents and scouting them.

With this, he opined that clubs would get value for money if they purchase players dwelling mostly on proper talent identification and scouting.

Sports Journalist and Digital Media Expert, Michael Oti Adjei, also took participants through sessions about the era of digital media and how clubs can tap into the numerous benefits the field offers the footballing world.