Armed Forces Support To Civil Authority In The Fight Against Covid19 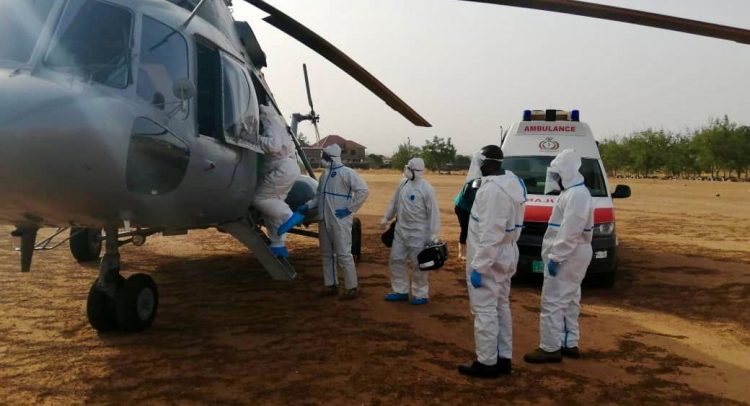 The Ghana Armed Forces (GAF), comprising the Ghana Army, Ghana Navy and the Ghana Air Force has been supporting the Civil Authority in the fight against COVID-19 in several ways.

Prior to the Restriction of Movement in Greater Accra and Greater Kumasi and Contiguous Districts/Municipalities, GAF was at the forefront in the fumigation of markets; a national exercise to disinfect markets across the country and also clean-up exercises to rid the markets of filth.

Other assistance to Civil Authority included operations to ensure compliance of the partial lockdown (OPERATION COVID SAFETY), deploying Naval vessels geared towards stopping intruders who use the sea corridor into the country, air reconnaissance both over land and sea, airlift of VVIPs and medical logistics and airlift of COVID-19 samples for testing.

These and many others are the tasks the GAF has been engaged in during this period of COVID-19.

At the service level, the Ghana Army in coordination with the Local Government Authorities provided security during a national exercise to disinfect markets and clean-up exercises to clean markets of filth across the country.

The Ghana Army also dominated population centres before and during the partial lockdown, by way of securing key points and vulnerable points.

The Ghana Army also conducted operations to ensure compliance of the partial lockdown and assisted Ghana Police Service to arrest persons who flouted the Restrictions of Movement Order by the President of the Republic.

The Army also gave transport support for distribution of essential logistics and personnel and additionally assisted in providing emergency medical supplies in various hospitals across the country.

In partnership with the United States of America, GAF is at the forefront of combating COVID-19 in Ghana with the deployment of a state-of-the-art Mobile Level II Hospital at El-Wak Sports Stadium.

The Ghana Army Engineer Corps in collaboration with the COVID Safety Private Sector Fund and the Ministry of Health is constructing a 100-Bed infectious disease isolation and treatment facility at Ga East Municipal Hospital.

Similarly, the Engineer Corps fenced an isolation centre at the Ghanaman Soccer Centre of Excellence in Prampram. The Ghana Army is also providing security at the isolation centres at the Pentecost Convention Centre at Gomoa Fetteh and at Tamale.

The Army supplied water to deprived communities in the La-Dadekotopon Municipality; over 7000 individuals were provided with water.

This is in response to the government of Ghana’s desire to serve the people of Ghana.

Next, the Ghana Navy in support to the Ghana Army in the fight against COVID-19, attached troops to Southern Command of the Army to assist in enforcing Restriction on Movement measures on land.

Both Commands sailed a ship each to investigate alleged ferrying of persons from Cote d’ivoire to Ghana in the general area of Apam, Winneba, Senya Beraku and Nyanyanu. The Commands had personnel deployed along the entire coastal stretch for beach combing, patrols and sensitization of the coastal communities.

The Navy also joined in Air reconnaissance in collaboration with the Ghana Air Force and held interactions with District Chief Executives in some communities to aid information sharing in relation to suspicious activities by fishermen who were using canoes..

Accordingly, the Ghana Air Force undertook various flights/activities in support of the Operation which included airlift of medical Supplies from Accra to Kumasi, Tamale, Wa and Bolgatanga.

The Air Force at a point had to airlift a COVID-19 patient from Bolgatanga to Tamale with helicopter to Accra by fixed wing aircraft.

This was done in conjunction with medical staff of the 37 Military Hospital.

The Ghana Air Force was additionally on standby at all times to fly more logistics from Accra to various regions in the second week of the partial lockdown.