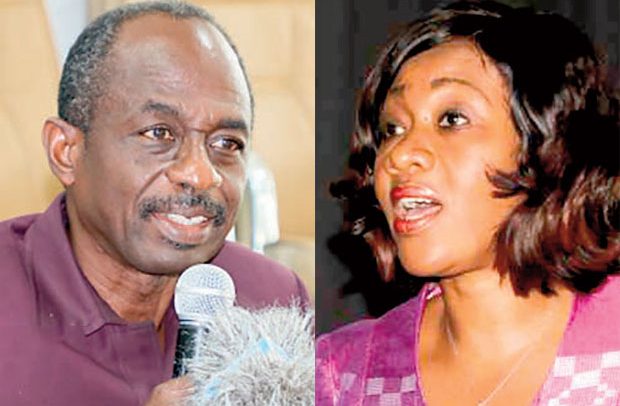 JOHNSON ASIEDU Nketia, the General Secretary of the largest opposition political party, the National Democratic Congress (NDC), has gone berserk by unleashing unprovoked attacks on certain personalities in the country, especially the Chairperson of the Electoral Commission (EC), Jean Mensa, simply because she is trying to lead the compilation of a new voters’ register ahead of the December general election.

Without any justification, the NDC man verbally assaulted Mrs. Mensa and her deputy, Dr. Eric Bossman Asare, describing them as ‘mad’ people who require ‘medical check-up’.

Asiedu Nketia nicknamed as ‘Mosquitoe’, appeared fired up whilst addressing his party people, mostly fishermen, during a secret meeting.

At the meeting, he is captured on the tape also attacking Supreme Court judges by imputing partiality in the work they do, claiming they are all friends of President Akufo-Addo and owe allegiance to the President.

On the tape, he appears to belittle the intelligence of the revered judges, who have not offended him in any way.

Asiedu Nketia, who was responding to a question posed to him by an attendant of the meeting, said “it is true that President Nana Akufo-Addo has appointed his friends into the Supreme Court, but the NDC has no option than to go the same court for redress,” when the voters register case, which was decided on Thursday, was raised.

Sensing his irresponsible remark could land him in trouble, he quickly turned around to say even though the judges owed allegiance to the President, they cannot rule in favour of their ‘friend’ in a case regarding whether holders of birth certificate should be allowed to register and vote in the country.

“Even though someone has appointed solely his friends into the Supreme Court, I am expecting positive results from the court because this same Supreme Court holds the view that people with voters’ ID cards are Ghanaians,” he said.

“If someone is compiling names of Ghanaians that are eligible to vote and people holding voters’ ID cards are being denied that right to register and vote, definitely the court cannot make a U-turn and rule differently this time,” he pointed out.

In this regard, he said “I trust that the court would consider the public interest and know that any different ruling or bias verdict on this same issue would put the court into public ridicule. This is a straightforward case and nobody can twist the law.

He said the judges are aware that if they bow to pressure from the President and twist the law and rule to deny people with birth certificates, the right to register and vote, they (judges) would have their reputation at stake so they would do the right thing.

He then switched his attention to the EC boss once again making cynical remarks about her.

“You are all aware of the bad name that Jean Mensa has earned for herself after she allowed herself to be used by the President, who appointed her to office. The reputation of the judges is also at stake; therefore, they would act appropriately,” he claimed.

Asiedu Nketia, who sounded like he was addressing fishermen who are loyal to the NDC, also prepared the minds of his listeners about the need to proceed to court and file for an injunction to be placed on the upcoming voters’ registration exercise.

“You can organize yourself in groups or singularly; you can go to court and pray to the court that you are a Ghanaian with a birth certificate but because you don’t have a passport, the EC is denying you your right to register and vote,” he stressed.

He said he was aware some Ghanaian fishermen in the Western and Central regions had been locked up in Benin due to the Covid-19 restrictions, noting “you can even go to court on behalf of your friends in Benin to secure court injunction on the registration exercise.”

According to him, the law explicitly states that every Ghanaian, irrespective of where he/she is domiciling, should be located and allowed to register to enable them to vote “so conducting the registration exercise when some fishermen are locked up in Benin is against the law.”

At that juncture, one of the listeners then drew the attention of the NDC scribe by asking as to whether they would not be found guilty of contempt of court for speaking about the registration exercise case which was before the court, and Asiedu Nketiah instantly retorted that nobody could be cited for contempt of court on the voters’ registration issue.

“The NDC is only in court to ask about the interpretation of the law as to whether it is lawful to deny some Ghanaian citizens with birth certificates the right to register to vote and rather allow those with passports and Ghana cards to register.”

According to him, one could be cited for contempt when the person had passed judgement on a case pending in court “but in this case, we are only seeking interpretation so nobody can cite you for contempt. There is no winner or loser in this case.”

According to him, the NDC leadership is ever ready to offer the needed financial and logistical support to enable the concerns of the fishermen to be heard through a series of successful press conferences and other programmes in the coming days.

The NDC General Secretary also used the Covid-19 pandemic to push his case, saying “they are starting the registration exercise now with over 14,000 confirmed Covid-19 cases.”

Asiedu Nketia then turned the heat on the EC boss, saying the law should make provisions for those that have been mandated to register people that are eligible to vote to be tested to see if indeed they are not mad and have sound mind to carry out such an important national exercise.

“If the person doing the registration is suffering from a mental problem definitely he/she would register his colleague mad people to get the right to vote,” he fired, attracting wild applause from his charged audience.

“They should be tested because the strange actions of Jean Mensa and Bossman so far prove that they are more than mad people. They are fond of refusing every wise suggestion from people with sound minds,” he added.