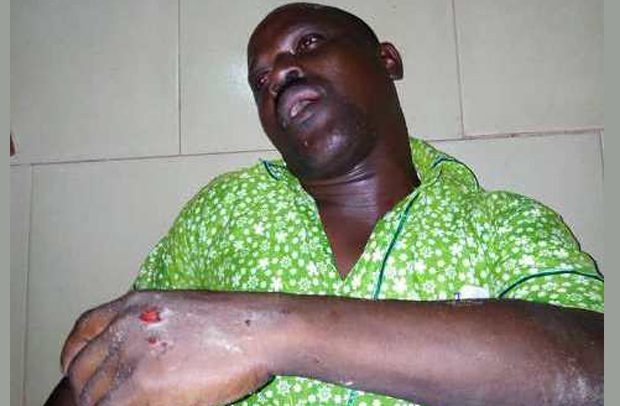 Jerry Azanduna after the attack.

Hassan Ayariga, the founder of All People’s Congress (APC), has allegedly hired thugs to attack a senior reporter of the Ghana News Agency (GNA) in the Upper East Region.

The attack on the reporter, Jerry Azanduna, comes just barely a week after various media reports suggested that Mr Ayariga was slapped by a Batik tie and dye dealer, who had gone to his home to question him on why he left the People’s National Convention (PNC) to form his own party.

Mr. Ayariga is said to have been incensed by the reports and subsequently called on the management of GNA in the Upper East Region to protest against the story but did not contest its content.

He, however, allegedly mobilized thugs to attack the reporter for authoring the story after he was lured into the home of Mr. Ayariga under the disguise of covering a press conference in connection with the attack on him.

According to the GNA reporter, a group of young men called to invite him to a press conference to be addressed by Mr. Ayariga.

They picked him in a vehicle and when they were approaching the venue, they told him the press conference had been rescheduled to a different location.

The men, numbering about five, drove the car to Mr Ayariga’s house instead of the scheduled venue, where Mr Ayariga allegedly ordered the men to subject him to severe beatings after questioning him over a story he wrote about Ayariga.

Mr. Azanduna earlier realized in the car that he was in some kind of danger considering the route the driver took as they were approaching the venue for the press conference.

He, therefore, quickly took his mobile phone to call for help whereupon the other occupants in the vehicle started beating him, as they drove straight to Mr. Ayariga’s house.

When they got there, Mr. Ayariga asked Mr. Azanduna what he wanted in his house.

When he explained that he was to cover a press conference to be addressed by him, Mr Ayariga allegedly ordered the people to severely beat him until some security personnel who got wind of it and came to his rescue.

According to Mr Azanduna, he was severely beaten in the presence of an armed policeman, who stood by helpless, leaving him to suffer bruises all over his body, including his eyes.

But for the timely intervention of the security personnel who rescued him, the reporter’s ordeal and fate would have been terrible.

Meanwhile, the Ghana Journalists Association (GJA) has condemned ‘uncivilised’ attack on the reporter which is believed to have been masterminded by Hassan Ayariga.

In a strong-worded statement, GJA described the attack as an uncivilized behaviour and a pure act of lawlessness.

The statement, signed by its President, Affail Monney said “The GJA finds the attack on Mr. Azanduna very distasteful; an impunity against freedom of the press and an infringement on the fundamental human rights of the journalist.”

It therefore called on the Ghana Police Service to investigate the attack and bring to book the perpetrators of the heinous act.

“The GJA wishes to use this opportunity to remind members of the general public that Ghana’s Constitution provides several avenues for seeking redress concerning what they consider to be unfair reportage instead of taking the law into their own hands,” the statement added.