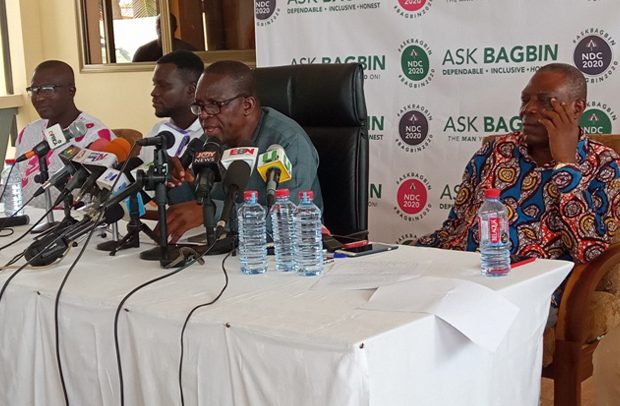 Alban S. K. Bagbin, Second Deputy Speaker of Parliament and National Democratic Congress (NDC) flagbearer aspirant, has apologised to Ghanaians for his late response to issues raised in the media concerning him.

Speaking at a press conference on Tuesday in Accra, in response to the criticisms on social media and mainstream media on some alleged statements he had made during his campaign tour of the Volta Region, Mr Bagbin said his late response was due to the fact that he had travelled outside the country when the issues were being raised in the media.

He said he had called the press conference because of the importance he attached to the issues raised and to reassure all Ghanaians, especially the Ghana Federation of the Disabled, other civil society organisations and the NDC family, who by one way or the other felt offended by his alleged comments, of his respect and support for persons with disability.

“I render my heartfelt apologies to you all. I want to take full responsibility for the indiscretion in going public with issues that should otherwise be private to the NDC. I have learnt that such disclosure could raise emotions among some sections of the Ghanaian society,” he stated.

That notwithstanding, Mr Bagbin used the opportunity to clarify a few issues for the avoidance of doubt and to allay any fears of discrimination or non-inclusive governance, in the event that he was elected flagbearer and eventually President of the nation.

“For the records, I wish to state emphatically that I did not say persons with disabilities are not competent to be appointed to public offices or Ministerial positions. Never. I did not say that,” he indicated.

“What I said was that certain wrong decisions were made in placing or assigning some government appointees. This wrong placement cost the NDC some votes.”

He said, he cited three ministers to illustrate his point and stated that they were all very brilliant and capable persons but they were assigned to inappropriate ministries.

“I never questioned the competence of the appointees of the NDC government. To the contrary, I praised them. I only questioned the wisdom in placing three of them in some designated Ministries.”

Mr Bagbin also said if an appointee of Government had a known standing conflict or problem with the people or institution he/she was appointed to oversee, the ultimate results would be the displeasure of such an institution towards the government.

He pointed out that if the stakeholders and followers of the institution were that displeased with the government they were likely not to vote for that government.

“If I said a particular appointment into the Ministry of Chieftaincy would affect the electoral fortunes of our party, it is not to say that the person appointed is incompetent,” he said.

“It is because there is a standing tradition in our chieftaincy institution that disqualifies that person to oversee chieftaincy affairs and would incur the displeasure of the traditional leaders for the party if the person is appointed to the Ministry.”

He explained that it did not and could not mean that the person in question was not competent to be appointed to any other Ministry of State.

He said it also did not and could not indicate his preference of the custom or tradition that disqualifies the appointed person.

“What it meant was that the competence of the appointed person, however unparalleled, should not be the deciding factor in appointing him to the Chieftaincy Ministry.”

Mr Bagbin said this was especially so when the chiefs openly aired their objection after the person had been appointed to that Ministry.

“If I said the appointment of a particular person, as a Deputy Minister of Education responsible for Tertiary Education was politically inexpedient, it is not because the person is incompetent for all ministerial appointments,” he said.

“It is because there is a standing conflict between that person and some University lecturers that would make his appointment a source of lecturers’ displeasure.”