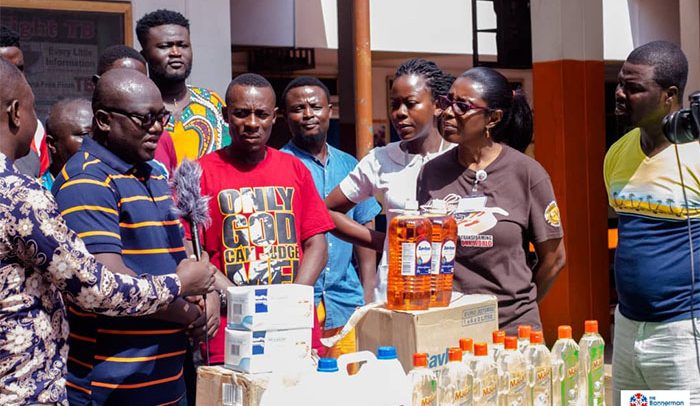 The New Patriotic Party (NPP) Parliamentary Candidate for the Odododiodoo constituency, Edward Patrick Nii Lante Bannerman, has joined the campaign against the dangerous corona (covid-19) virus which has taken the world by storm.

Over the weekend, Nii Banner as he is affectionately called by his constituents decided to donate sanitary items to police stations and health facilities in his constituency and beyond through the use of his charity organisation, the Bannerman Foundation which is committed to providing support to the community.

In a brief remark everywhere he went, Bannerman said the donation was his little contribution to compliment the bigger national and global war against the spread of the corona virus which has affected not less than 24 lives in the country and claimed several lives across the globe.

Together with him on the rounds was the Greater Accra Regional Secretary of the NPP, France Nii Odarlai Parker and Odododiodoo constituency executives of the NPP.

Deputy Superintendent of Police (DSP) Kofi Kwarteng Boampong, Korle Bu police MTTD Commander who received the items on behalf of the Korle Bu district police commander pledged their commitment to put the items to effective use whiles urging Ghanaians to ensure strict adherence to the President’s advice of observing social distancing and stop shaking hands whiles following other protocols and measures announced to help stop the spread of the virus.

At the Mamprobi Police station, the items were received Superintendent of Police, Cephas Arthur who promised same and asked for greater cooperation from all citizens and stakeholders in these trying times.