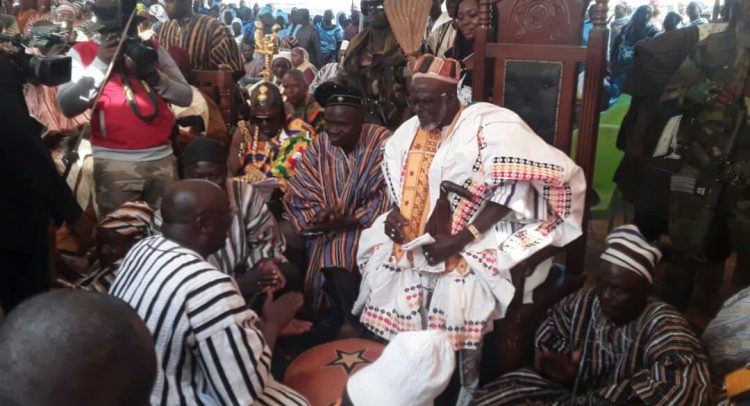 The Over-Lord of the Bawku Traditional Area, Zug-Raan Bawku Naba Asigri Abugrago Azoka II, has rejected calls by some persons to join the ‘Western Togoland.’

“I admit having been contacted by persons advocating for secession of parts from Ghana a number of times, but I want to assure you that I do not buy into their wishes. It is not in the interest of my chiefs and people to split my traditional area between two States. It would not be reasonable to accept that,” he said.

Zug-Raan Bawku Naba Asigri Abugrago Azoka II was speaking through his secretary at the climax of the 32rd annual Samanpiid festival held in Bawku in the Upper East Region.

Though the Bawku Naba Asigri Abugrago Azoka II did not mention the names of the persons who came to him to get parts of the Bawku Traditional Area to join a new state, it is suspected that the persons are connected to a group seeking to create a new state (Western Togoland) out of Ghana’s territory.

Some of them were recently arrested in the Upper West Region.

Aside the assurance never to succumb to the wishes of the secessionists, the Paramount Chief of the Bawku Traditional Area called on government to equip security personnel at Ghana’s borders with neighbouring Burkina-Faso and Republic of Togo and inside the Bawku Municipality to protect lives and properties, considering the insecurity outside Ghana’s borders.

Zug-Raan Bawku Naba Asigri Abugrago Azoka II assured government of the commitment of the people of Bawku to remain on the path of development and leave the unpleasant past, adding, “ever since our senseless conflict ended some years ago, we have based our priority on the healing of wounds and the mending of fences in broken relationships. It is now time to embark on vigorous pursuit of economic and social development of our people.”

This year’s Samanpiid was under the theme, “Harnessing the economic, social and cultural heritage of our people for the development of Kusaug”

Others included Members of Parliament from the Bawku Traditional Area, as well as the Minister of Aviation and MP for Navrongo Central, Joseph Kofi Adda.

Ghana Premier League Match Day One Scores At A Glance