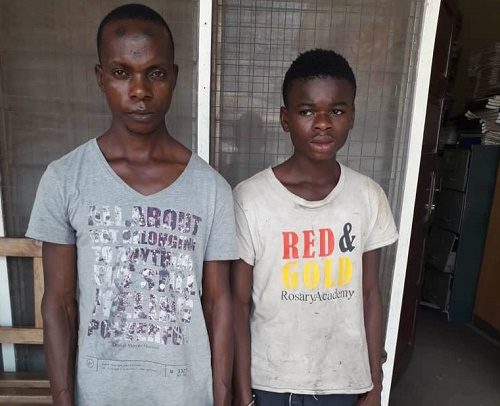 Eighteen-year-old Kofi Daniel Gontog from Techiman in the Brong-Ahafo Region has been jailed by a Sunyani Circuit Court for entering a forest reserve to cut down trees.

The court, presided over by Jojo Hagan, offered him a six-month jail sentence while his accomplice, Albert Ngmeni, 27, a chain saw operator, also had six months to serve in prison.

They went to fell trees from the Mpameso Forest Reserve at Dormaa Ahenkro.

A third suspect, known only as Michael, is on the run and is being sought by the police.

The Assistant District Forestry Manager in-charge of Dormaa Ahenkro Forest Services Division, Felix Amoah, is the plaintiff in the case.

Prosecuting, Chief Inspector Ernest Donyina told the court that Mr. Amoah and his monitoring team were on their usual duty at about 2:00pm on January 26, 2019, when they spotted the accused persons sawing three wawa trees and one utile, a large tropical African hardwood widely used as a substitute for mahogany, in a forest near Santase in the Mpameso Forest Reserve.

They were, therefore, arrested and handed over to the police for investigations.

He said investigations revealed that Michael engaged the two— Albert and Kofi— to go and fell the trees and saw them for him on January 24and 26, 2019.

Lumber cut from the three wawa trees were valued at GH¢7,382.20 while that of the utile was valued at GH ¢3,220.97. They were consequently charged with the offence of conspiracy to commit crime, entering the forest reserve and harvesting timber without any timber utilization contract, contrary to Section 23(1) of Criminal Offences Act 1960 and Section 17(2a) of Timber Resource Management Act 1918, (Act 547).

The judge refused to accept their plea that they were not aware the area is a forest reserve, hence they have been sentenced to hard labour.

From Accra To Kaduna And Back; A Travelogue Of Twists, Turns

Woe To You, False Prophets