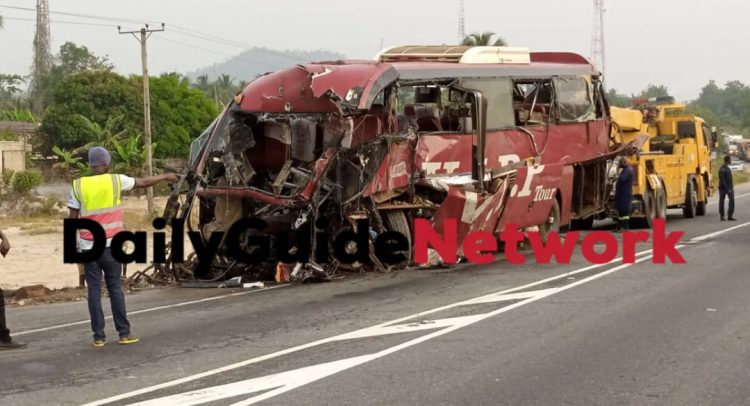 TWO Kia Grandbird buses including VIP branded one have crashed head on leaving 16 persons dead.
The fatal accident occurred Friday dawn at Akyem – Asafo on the Accra to Kumasi Highway in the Eastern Region.

The two vehicles involved including a Kia Granbird bus registered GT 5629-18 with passengers on board from Accra towards Kumasi direction had a head-on collision with another Kia Granbird bus with registration number GE 5510-15 around 1am.

According to reports, the suspect driver now deceased was driving the Kia Granbird bus from Sankore heading towards Accra.

The deceased driver, from Kumasi’s direction on reaching a section of the road at Akim Asafo Junction made an unsafe overtaking without observing traffic from the opposite direction.

In the process, he had a head-on collision with the other bus from Accra direction. 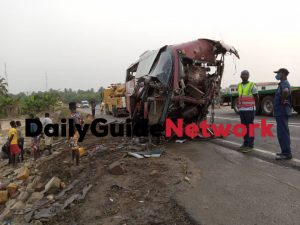 Sixteen passengers from both vehicles, comprising 13 males and three females including a three-year-old boy died on the spot. 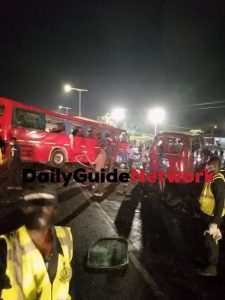 Personnel from the Ghana National Fire Service and Abundance Service from Suhum, Bunso, Kibi, and Ayensuano with the support from the Police were at the scene for rescue operation.

The bodies were removed and deposited at Suhum Government Hospital mortuary for preservation, identification, and autopsy.

Thereafter, the accident vehicles were towed from the scene to a safer place for the free flow of traffic.

Meanwhile, some injured victims who were in critical condition have been reported dead, at the time of filing this report.