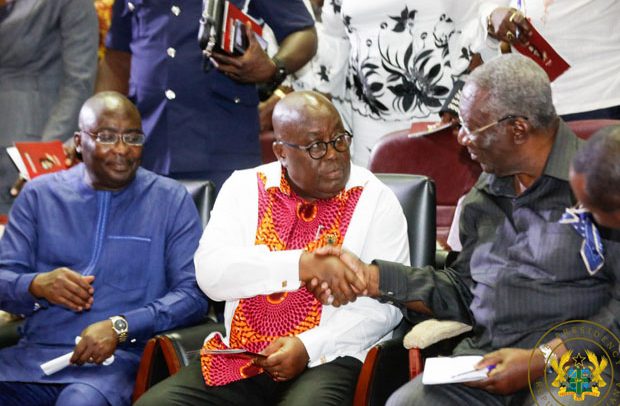 Speaking at a lecture to mark the 40th Anniversary of the death of Dr Busia, President Akufo-Addo said the late Prime Minister dreamed of a peaceful and prosperous nation.

The President said that Dr Busia led the Progress Party to “a solid victory in 1969 and served as Prime Minister from that time until 1972.

President Akufo-Addo said that Ghana would have achieved much in terms of national development, especially at the rural level if Dr. Busia had been given the chance to govern further.

He described the late Prime Minister as an “illustrious son of this land who viewed freedom as a great ally of progress.

President Akufo-Addo noted that the overthrow of the Progress Party Government meant that Ghana was deprived of the full impact of Dr Busia’s agenda for development.

“Decades have gone to show that we turned out to be the poorer for it. We can imagine, for example, where our nation would have been now if he had been given the opportunity to develop his visionary programme of rural development,” he said.

He continued, “Some of the ills of contemporary Ghana, such as rural-urban migration, which has been the source of much current social tension, could well have been avoided.”

According to President Akufo-Addo, Dr Busia was unequivocal that democracy cannot endure if the leaders and the people are not committed to it; if they do not understand it or if they are not sincere to its principles.

“He believed that democracy could and must work in this country, and it was for this reason that patriots such as himself, Joseph Boakye Danquah, Emmanuel Obetsebi-Lamptey, Edward Akufo-Addo, William Ofori-Atta, S.D. Dombo, B.K. Adama, Baffour Osei Akoto, Victor Owusu, R.R. Amponsah, Joe Appiah, Osei Baidoo, Oheneba Kow Richardson, S.G. Antoh, Modesto Apaloo, Ashie Nikoi, Attoh Okine and others, risked their lives to fight against the asphyxiation of our freedom and the incapacity of our parliamentary system to defend it,” he said.

He said Busia was indeed great and could discover talent from a distance, urging elders in the party to mentor young politicians.

Even in ail health Dr Busia felt the need to address the economic plight of the less privileged, the Speaker said.

Prof. Oquaye also urged young politicians in the NPP to collaborate with the leadership of the party to accept reshuffle in the larger interest of the party.

He was an intellectual and religious, as well as a political icon during Ghana’s struggle for independence and early independent era.

To Busia, the concept of democracy was a welfare state in which everyone was his brother’s keeper.

The wellbeing of the ordinary Ghanaian was at the heart of Busia’s Government in which Edward Akufo-Addo, father of President Akufo-Addo, served as a ceremonial head of state.

The event gave the platform for many to tell the stories of the formation of the Dankwa-Dombo-Busia Tradition.

The family of the late Chief Dombo, represented by Richard Dombo, Chief Executive Officer (CEO) of the Ghana Railway Development Authority, said the pioneers left a legacy of selflessness.

The 40th anniversary celebration was also held in Wenchi in the Bring Ahafo Region and Brazil, according to George Ollennu, who delivered a speech on behalf of the Busia Family.

“Busia knew where he was going. Busia commenced his life journey with a clear destination in mind,” said Mr Ollennu.

The “latter day politicians” were called upon to be selfless and put collectivism and nation or party ahead of individualism at the event.

Ex-President John Kufuor, who chaired the occasion, recounted his days with the late Prime Minister.

“The man we are celebrating today chose me from my very young age as his protege, according to Mr. Kufuor.

“In fact he referenced me to the University of Oxford,” he said.

Mr. Kufuor said he was appointed as Deputy Foreign Minister by Prime Minister Busia after being elected Member of Parliament in 1969.

He attributed the success of his New Patriotic Party (NPP) administration in the Fourth Republic from 2000 to 2008 to the hard work and values of Dr Busia.

“The seeds that the government that I led came to harvest were all sown by Dr. Busia, he told the audience.

In attendance were ministers of state, members of the clergy, leadership of parliament, traditional rulers, among others.