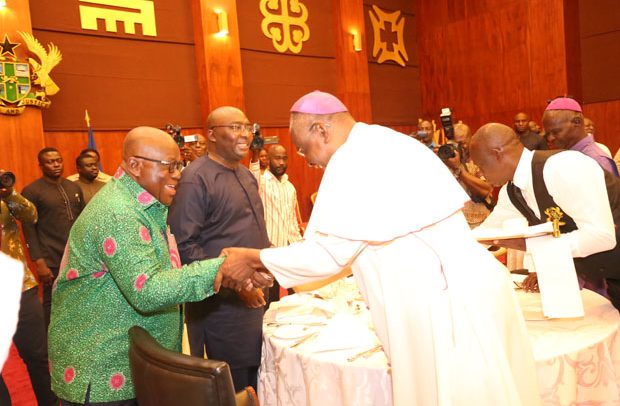 President Akufo-Addo and the Clergy

Various religious groups in the country have thrown their weight behind the double-track secondary school educational system introduced by government.

The double-track system divides the entire student body and staff into two different tracks; while one track is in school, the other would be on vacation.

The rotation sequence would depend on the year-round calendar being used.

In Ghana, the school calendar starts from September and ends in June/July entailing three terms.

The first term is from September to December, the second term starts in January and ends in April while the third term is from April/May to July.

Furthermore, every semester would be 80 days for the two tracks.

In an interview with the media after a breakfast with President Akufo-Addo at the Jubilee House in Accra yesterday, Reverend Dr Michael Boadi Nyamekye of the Makers House Chapel said “if you are to consider the number of children that are going to go to school with our current facility or the infrastructure we have, if we don’t go the double-track system, I can assure you that a lot of the kids are going to stay in their houses; they will not be given admission because there is no nation that will have the capacity to meet the current needs of people and of course, of our population growth.”

“If you look at the things that are set out by the Minister of Communications and the Deputy and the President, we think that it’s something that’s going to go well; it is good, it will decongest the schools, it will increase intake and teachers, who were not being given postings or employment are going to get the opportunity to go to the classrooms because if you look at how it’s being structured it’s going to be something that is going to increase the intake and decongest the schools,” he stated.

His only concern was the post implementation evaluation to determine whether the country would be getting value for money and results, saying “as we go along, we should be able to evaluate it as a people and not leave it in the hands of only the politicians to run; school has been something that the churches have been interested in running.”

Spokesman for the National Chief Imam, Sheikh Aremeyaw, indicated that the system would create equal opportunity for every child to go to school, with no discrimination against the child that comes from a poor home and one that comes from a rich one.

Vice Chairman of the National Association of Charismatic and Christian Churches (NACCC) said “the Deputy Minister of Education explained it explicitly.”