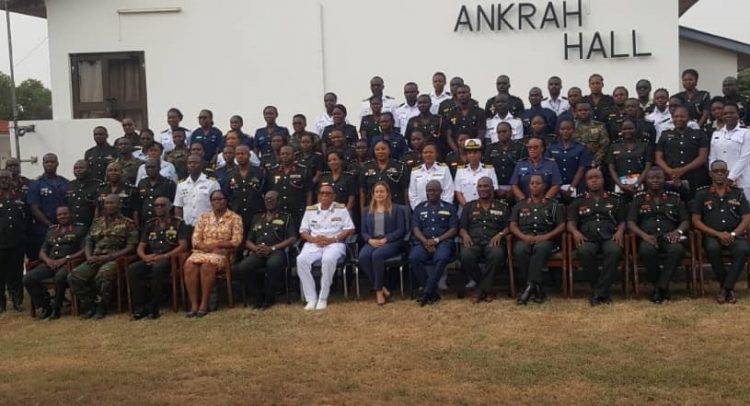 The Canadian High Commission, in collaboration with the Elsie Initiative and the Ghana Armed Forces Command and Staff College (GAFCSC), has organized a two-week leadership course for female military officers.

During the opening ceremony of the course, which was held at the GAFCSC at Teshie in Accra, the Deputy Commandant of the college, Brigadier General Mike Akpatsu, said the programme aimed at enhancing the leadership, analytical and communication skills of junior level officers to perform command and staff functions in the United Nations (UN) setup.

By the end of the course the officers would understand the techniques used in general/operational staff work, UN correspondence, operational briefs and operational report writing, he said.

“They will be taught to be familiar with some aspects of domestic and international affairs and how these influence security, intelligence, social-economic and political stability of UN operations.

Madam Daine Tisdall, Senior Liaison Officer, Canadian High Commission, in an address, said the programme was the first in a series of activities of the Elsie Initiative and would explore ways to increase the meaningful participation of women in peace operations.

“We’re doing this together because we know that when women are part of United Nations Missions, communities respond better. They participate more if they share more information; they feel more comfortable with UN people in their country and they also reduce levels of sexual exploitation and abuse,” she added.

She said that the partnership would not only focus on numbers of women in peace operations, but also how women can meaningfully engage with Canada and Ghana over the next few years.

Present at the event was the Commandant of the GAFCSC, Brig Gen. Moses Beick Baffour, including other senior military officers.