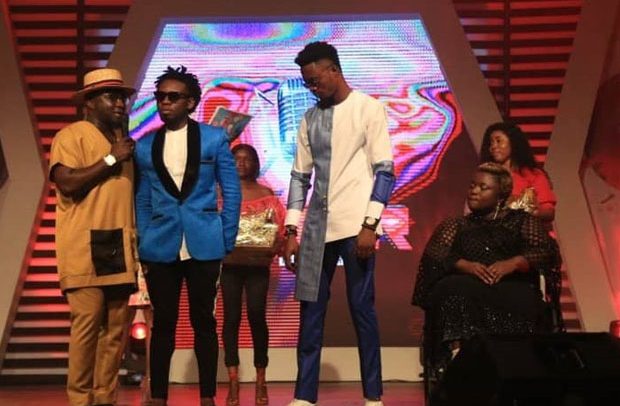 Kobi Kobbs, Kweku Darlington and Aemma on stage with a TV3 presenter during eviction

After seven weeks of competition, exhibition of vocal prowess and showmanship on TV3’s Mentor Reloaded stage, the real action has begun, and reality is creeping in for contestants as eviction blues come beckoning.

For the past weeks, all 16 contestants competing for the enviable two-bedroom house have had a smooth ride without any eviction, but the honeymoon period came to an end on Sunday, January 12, when three of the contestants were evicted. Unfortunately for Aemma, Kobi Kobbs and Kweku Darlington, their dream of sailing through the competition and emerging winners could not materialise as they failed to amass enough votes and judges’ score, leaving them at the mercy of eviction.

With a bottom five to choose from, judges decided to save rapper Chichiz and Missy, leaving the rest to go home and out of the competition.

However, one out of the three stands a chance of making it back when voting lines are opened for a ‘recall’ later in the competition.

Sunday night’s performance was R&B and soul music-inspired, and each of the contestants came on with their A-game, although this could not save the three evictees.

Mentor Reloaded airs on TV3 every Sunday at 8:00 pm, and is also live on all social media platforms of the station.

Viewers have the opportunity to vote for their favourite contestant via the ‘Mentor App’ on Google Play Store or the Apple Store. Voting can also be done through the short code *713*19#.