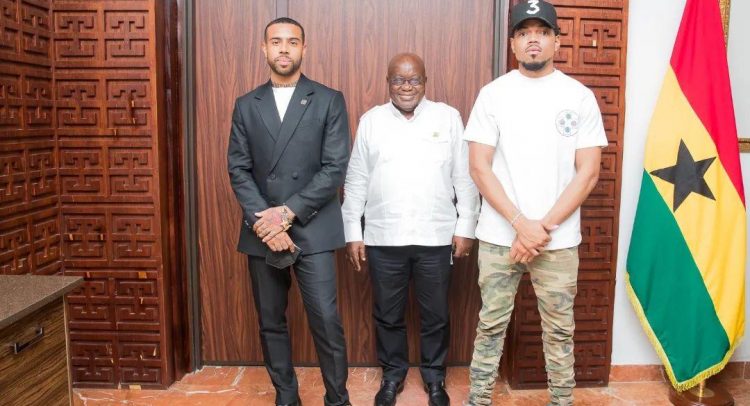 Chance The Rapper and Vic Mensa have met with President Akufo-Addo at the Jubilee House as part of the two US-based musician’s visit to the seat of government in Accra earlier in the week.

Their meeting was among other objectives to discuss ideas that could aid in bridging the gap between artistes in Ghana and the U.S.

According to the Year of Return Instagram, Chance The Rapper and Vic Mensa wish to use “their strong ties and relationships in the music industry to connect artists as well as amplify the talent in Ghana and the rest of Africa.”

YouTube creator and TEDx Speaker, Ivy Prosper and some members from the Beyond The Return team were at the meeting.

The musicians have been having a great time in Ghana. Vic Mensa has been in town earlier during the Holiday activities and was subsequently joined by Chance The Rapper. They have since been at several events in town.

Chance The Rapper even trended on social media when he was spotted in a Ghanaian church on Sunday, January 9.

He also met with Sarkodie and the two of them were subsequently seen hanging out in a studio leading to reports that they have a song coming up.