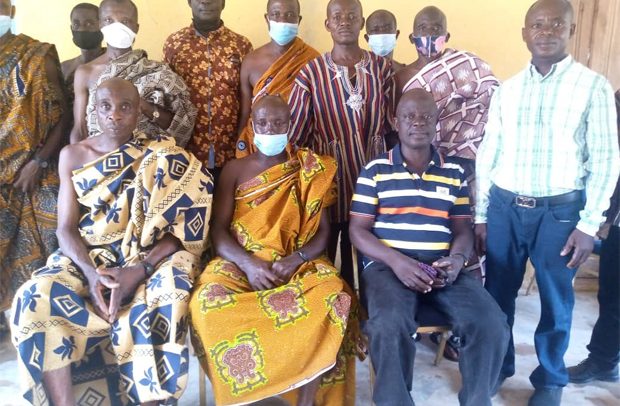 THREE CHIEFS in the Amensie Central District of the Ashanti Region have pledged their full support in the fight against illegal mining activities, popularly called galamsey, in the area.

The traditional leaders with the assistance of other community leaders, assembly members and unit committee members have recently succeeded in preventing illegal miners from carrying out their operations along the River Offin in the area.

The action of the custodians of the communities was to save the river which serves as the only source of water in the area, from further pollution.

Speaking on behalf of the chiefs at a news conference on Tuesday, Nana Nsiah Amofa said illegal mining has destroyed the vegetative cover in the three communities and warned the youth to refrain from going back into galamsey operations.

He explained that their ability to send the illegal miners packing from their localities was as a result of the formation of a committee by the communities to ensure constant surveillance of the area.

Nana Amofa cautioned that harsh traditional punishment awaits anyone caught undertaking galamsey activity before the person would be sent to the police to face the full rigours of the law.

To ensure that their campaign effort is sustained, the chief disclosed that 20 swimmers from the communities have been selected and provided with canoes to patrol the Offin River to further prevent persons from mining in the area

“We want to advise those involved in this criminal activities to rather find meaningful jobs to do until President Akufo-Addo comes out with alternative livelihood measures for them,” he said.

For his part, the assembly member for Fahiakobo/Abubuasin/Wromanso and Fawoman electoral area thanked the chiefs for their proactive steps to completely stop galamsey in the area.

He said that the actions by the three chiefs have yielded positive results in his electoral area resulting in increased attendance in various schools recently.

According to him, before the ban was announced most school going-children were found at the galamsey sites helping the illegal miners but since the chiefs announced to ruthlessly deal with anyone engaged in illegal mining, the children are now back to school.

He appealed to other chiefs that have similar problems in their communities to emulate the three chiefs to help the government bring illegal mining activities to an end.