Child-Friendly Interviewing and GBV Courts, the Right Step in Protecting Women and Children 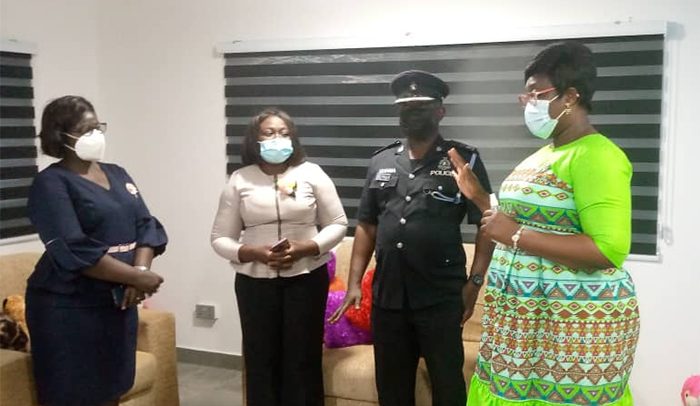 An Interviewing Room Being Commissioned For Madina DOVVSU

“Privacy relates to an individual’s ability to determine for themselves, when, how, and for what purpose their information is handled by others.

The most painful thing in life is to walk in town knowing very well that everybody knows your past and what goes on in your day to day life,” were the words of a 45-year-old trader, who for lack of privacy, became a laughing stock in her area thereby forcing her to leave her matrimonial home five years ago.

Lydia Quansah(not real name) was married to a policeman and lived with her husband at Odorkor Police Barracks.

She says even though they lived in Odorkor, her husband, then a corporal in the service was Stationed at Anyaa police station in the Ga Central Municipality of the Greater Accra Region.

“ I was facing serious marital issues and abuse in my marriage; a situation most of the police officers at the barracks were aware of.”

She said her husband was a bully who often assaulted her even in public at the least provocation.

“ One day, my husband brutally assaulted me and even threatened to kill me in the presence of some police officers at the barracks and when he had left for work, I decided to report him to the nearest police station.

I was not expecting him to be arrested but I thought, if I can report him, as a police officer himself, he would be made to sign a bond never to touch me again,” she said.

Lydia was at the charge office to report the matter when a Chief Inspector who was a friend to her husband, sacked her from the station.

The chief inspector again warned Lydia never to step foot at the station to report such ‘trivial’ matter.

“I had then arrived and told the counter Non-Commission Officer (NCO) that I was there to report the abuse of my husband.

At that point, I was so confused, got home and was praying that chief does not tell my husband that I tried lodging a complaint against him..” she said.

Madam Magdaline, mother of an eight-year-old girl who was also defiled by a next-door neigbour also recounted how they were denied justice at the court.

She said, even though the matter was taken to court by the police, the accused was acquitted and discharged after his victim was not able to render accurate testimony during the trial proceedings.

“Freeing the accused person did not mean my daughter fabricated the story, I realized she was nervous anytime the accused was present in court but there was nothing I could do about that,” she added.

One way to understand the differences between confidentiality and privacy is to conceptualize each as a closet containing all the personal information that a victim wishes to keep shielded from public view.

Confidentiality protects a broad range of information including the identity of clients’ medical records, immigration status, and other information. In crime reporting especially gender-based violence, confidentiality helps the victim feel safe when working with the law enforcement officer.

However, the structure of most of Ghana’s police stations prevents victims of gender-based violence who are going through physical, emotional, and psychological trauma to report their cases to the law enforcement officer for justice.
Another key challenge identified is how cases concerning children are heard in court.

In most cases concerning sexual violence, both the perpetrator and the victim are physically present in the courtroom thereby making it difficult for the victim to render accurate testimonies during the trial process as in the case of Magdaline.

The availability of special Interviewing rooms at the various police stations for such special cases and the provision of child-friendly specialized courts that will provide a conducive atmosphere for the child who is in contact with the law either as a victim, witness, or offender to render accurate testimony without fear or intimidation, is in its right direction.

However, checks have indicated that there are only three interviewing rooms fitted for the Ghana Police Service for such special cases in the country.

A DOVVSU coordinator, who spoke on condition of anonymity, says, the lack of structures for DOVVSU personnel at the various divisional commands make it difficult for them to interview victims of abuse in confidentiality.

She said at the district level, sexual and gender-based violence cases are handled by one or two investigators and with the supervision of the district commander who also supervises other criminal issues.

“It is only at the divisional level that we have trained DOVVSU coordinators supervising.”

She revealed that even at the various divisional commands where there are DOVVSU offices; they are allocated one or two rooms that house the coordinator and the investigators.

“What I have realized is that some of the victims, in the course of the interrogations, show signs of discomfort but since we have no option, we pretend not to have seen and continue,” she said.

Adding that, “the government and police administration must consider redesigning a good structure for DOVVSU offices if we want to keep the identities of abuse victims secret.”

Statistics from the Domestic Violence and Victim Support Unit (DOVVSU) of the Ghana Police Service have indicated that a total of 131 sexual and gender-based violence (SGBV) cases were recorded in Ghana between October 2020 and March 2021.

The Director-General of the Criminal Investigations Department, Commission of Police (COP) Isaac Ken Yeboah has revealed that 1,047 girls were defiled, while 305 women were raped in 2020.

Even though he did not share figures on cases of defilement and rape in the past, he said about 15,000 cases of violence against women were reported to law enforcement agencies annually.

The number of reported cases, he indicated, was less than the actual number of incidents that occurred in the year.

He, however, admitted that reported cases of gender-based violence do not progress at the various stations where the reports were received and the conviction rate has been low.

A child protection specialist who is in charge of the Justice for Children programme at UNICEF, Ms. Hilda Mensah says Privacy is so very important in cases of sexual and gender-based violence which is why UNICEF is making the efforts to support every DOVVSU office within the country with a well equipped interviewing room for such cases.

She said an interviewing room is a special facility or building that helps women and girls speak to the police in a manner that would increase their access to justice.

“UNICEF has so far put up three interviewing rooms for DOVVSU offices in Ashaiman, Madina (in the Greater Accra Region ) and Kasoa in the Central Region while three others are still under construction”

The three interviewing rooms have been set up in line with the vision of DOVVSU, which is to create an environment where domestic violence and other forms of abuse will be freely reported and collaborate with stakeholders to provide coordinated timely responses for victims,” she said.

Adding that, “It is expected to provide a congenial environment, such as privacy, to encourage victims and survivors of GBV to freely share their ordeal with investigators to facilitate investigations and prosecution of perpetrators.

The room is furnished with comfortable seats, a play area, learning items for children, flowers, and other materials to make especially children feel at home and cared for,” she revealed.

Ms. Mensah maintained that the interviewing rooms are to instill in the victims, trust, and confidentiality when it comes to sexuality as it has been to suit children of abuse as well.

“it is expected that the Counter NCO after knowing the mission of the victim or complainant will take her to the interviewing room where her statement will be taken without any interference by any person.”

“We have also trained police officers in this regard to assist educating women of abuse to report their abusive husbands.”

The Police, Judiciary, And Government Resolve To Stem The Tide

Inspector-General of Police, Dr. George Akuffo Dampare, in an address during the opening of the domestic violence and victims support unit office at the police headquarters said the police will continue to work to protect lives and property.
He admitted that some personnel finds it difficult in handling cases of marriage, child custody, and child care due to the tension and emotional attack of these cases.

“It is often very difficult to say it as it is when it comes to issues that tend to break down long-standing relationships and that is why our concern now is about preventing it from happening and when it does happen, we remain impartial in solving it.”

Justice Jones Dotse, a Supreme Court Judge confirms that the Judicial Service of Ghana in its resolve to help minimize the incident of gender-based violence in our society has taken several steps towards curbing the menace.

He says reforms taken by the service have been the establishment of specialized courts aimed at ensuring the effective and efficient administration of justice for specific types of cases or offences.

He said after the establishment of the first gender-based violence court (circuit court 5) in 2009, which was under the flagship programme on gender justice and UNDP support, the Danish government (DANIDA) also assisted the Judicial Service to establish nine (9) more Gender-Based Violence Courts in Tema, Koforidua, Ho, Cape Coast, Sekondi, Kumasi, Sunyani, Tamale and Bolgatanga in 2016.

“The Judicial Service with support from UNICEF introduced the child-friendly court concept due to gaps identified in the administration of justice for gender-based violence cases and in December 2018, the first Child-Friendly Model Court was established in Accra. This is now been replicated nationwide in all the regional capitals,” he revealed.

“Ghana’s commitment to the protection of women and children from violence is evident in its rectification of international treaties and the subsequent, incorporation into our laws.

Adding he said, “A nation cannot fully develop without protecting its women and children.

Hence, “Government is committed to ensuring that children and girls are given the needed protection as their security is critical in national development. A healthy family ensures a healthy nation.”