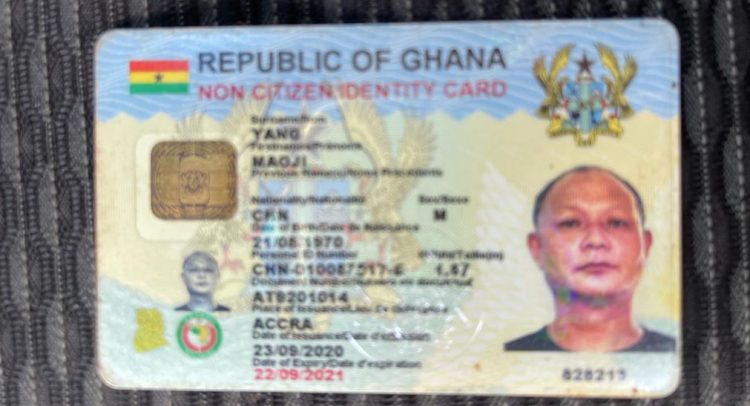 One more Chinese man has been arrested at the Pra River area as part of a renewed clampdown against illegal mining, popularly known as galamsey.

Yang Maoji, 50, was caught in the act, by the military taskforce deployed by the government to fight against the menace, in spite of the ban announced by the Minister of Lands and Natural Resources, Samuel Abu Jinapor.

Some mining equipment, which the suspect was using, were seized by the taskforce.

Yang Maoji had in his possession an identity card bearing his name and nationality issued to him by the Ghana National Identification Authority.

In footage capturing his activities and making rounds on social media platforms, a military personnel was heard questioning suspect Yang Maoji for choosing to pollute water bodies in the country in search of gold to the detriment of the country.

“Can you drink this water?” The Chinese national was quizzed repeatedly by the taskforce.

On April 28, 2021, President Akufo-Addo, as part of his determination to stamp out galamsey, authorised the Ghana Armed Forces to commence an operation to remove all persons and logistics involved in mining from the water bodies.

This was in furtherance of the resolutions of the final communiqué of the Stakeholder Dialogue on Small Scale Mining held on April 14 and 15, 2021, and the move is to ensure that mining within water bodies is immediately stopped.

The operation commenced on the River Pra in the Central and Western regions, involving 200 officers.

‘Outlaw Mercury Use In Small-Scale Mining’