‘Outlaw Mercury Use In Small-Scale Mining’ 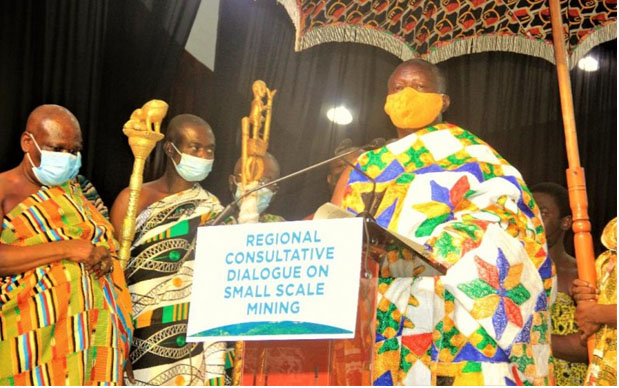 THE ASANTEHENE, Otumfuo Osei Tutu II, has asked government to ban the use of mercury in the country’s small-scale mining sector.

He said the use of mercury in gold processing was toxic hence the call for its outright ban to save human health and the environment.

Speaking at the regional consultative dialogue on small-scale mining in Kumasi, Otumfuo Osei Tutu said the prohibition of the use of mercury, which was already in force in international mining practices and standards, was necessary to ensure the safety of the people.

He said the country ought to promote legitimate and responsible small-scale mining and with the exception of properly designed mining alluvial operations, mining near rivers and water bodies should be outlawed.

This is because mercury also could harm the kidney and thyroid.

Otumfuo Osei Tutu underscored the need to train and build the capacities of small-scale miners to use less dangerous gold mining methods.

He also called for improved capacities for the Minerals Commission and the Environmental Protection Agency through effective resourcing to regulate the activities of small-scale miners.

The Asantehene said such measures would ensure compliance with regulatory requirements as well as responsible mining and practices.

He continued that, “As it was with the situation for large-scale mines, reclamation and rehabilitation of mined-out areas ought to be a key aspect of small-scale mining operations.”

He added that the renewal of mining licences should be contingent on effective mining and reclamation efforts by operators.

Otumfuo Osei Tutu reminded district assemblies of the crucial role they had to play in ensuring small-scale mining activities in Ghana conformed to the required norms.

“They should make sure that in collaboration with the regulatory authorities, small-scale mining is effectively monitored so it is done in compliance with the required practices and regulatory framework, and then illegal miners could also be stopped,” he stated.

“It is a national emergency, which calls for a national consensus,” the minister said, and called for patriotic and non-partisan approach to addressing the menace.

The dialogue brought together participants from the Ashanti, Bono-East, Bono and Ahafo regions.

It aimed at providing input into the national discourse on the regularisation of the sector through coordination of diverse views.

It was also to develop appropriate policy options with the overarching goal of improving the operation, regulation, management and good governance of the sector.