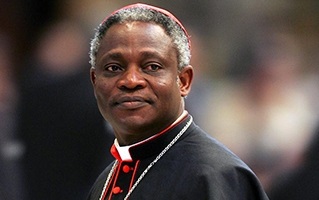 One of the prominent figures of the Catholic Church worldwide, Cardinal Peter Appiah Turkson, has backed efforts to clamp down on activities of errant churches and their pastors, in order to bring sanity into the country.

He said the recent order by the Ghana Police Service to pastors cautioning them against possible breaches of the laws on causing fear and alarm or to disturb the public peace with their ‘doom’ prophecies ahead of their watch night services on 31st December, was a step in the right direction.

He said Ghana should emulate the example of Rwanda where the government was able to bring sanity into religious activities through the strict enforcement of the laws in that country.

Speaking on Asaase Radio in Accra yesterday, Cardinal Turkson insisted that the church must be a haven for God’s presence and not for doom-mongering.

“True prophecy cannot happen without the very sincere relationship with God. When we talk about prophecy we are talking about God making His thoughts and ideas through people who become His children for humanity,” he said, adding “Prophecies come for the well-being of the people by making (sic) to them the pathways of God, but essentially to walk in the knowledge of God.

“You can go to a palmist if only it is about the future. That is not really what prophecy is. Prophecy, first and foremost, is regulatory of God’s own ways to humanity to ensure their safety, goodness and welfare.”

The Cardinal said “the end of year moment is a transition point and can be hyped up by the sense of anxiety about the future, but precisely this is not what is supposed to be in the church.”

He said “the church is a place where people are assured of God’s closeness and presence. People should be encouraged to find the hand of God and hold on to it and step into the future, rather than be thrown into a frenzy of uncertainty, insecurity, and fear of which they need somebody to predict the future for them,” adding “I think, probably we can learn from Rwanda, where proliferation of churches is being brought under control. And I think there is a lot in Rwanda, conditions which pastors and church founders need to fulfil.”

He said prophecies that have the tendency to put fear and panic in the public should not be encouraged, saying “we need to find a way of curtailing of all these because as you know, when I was a child growing up, we knew that there was a way fetish priests did their things.”

“Growing up in Nsuta and Tarkwa, we knew and heard stories like women walking and someone would come behind them and say do you see what is following you and the person would turn round and see nothing and they would retort if you had eyes you would see what was behind you. This is the beginning fear and anxiety that is sworn in the person. The person then feels that he doesn’t have eyes or gift of vision and that it is the fetish priests who have the eyes to see spiritual things.”

He said “so the creation of anxiety and uncertainty is the character that holds out these things and thrives on, and that is not religion.”

Cardinal Turkson said “we should set people on the path of the knowledge of God and the development of the virtues which flow from Him. We just celebrated Christmas and Paul’s letter to Titus explains Christmas to us,” adding “Christmas is making known the way of truthfulness, right path and right living. That is what we should be doing and not predicting and sowing fear or basing religion on a circle of fear and anxiety in people.”

The year 2021 ended without the usual scary prophecies about deaths, diseases and other negative afflictions by persons noted for such predictions.

The reason for the foregone was because the IGP, Dr. George Akuffo Dampare, had warned such persons to be measured in how they go about the pastime at that time of the year lest they infringe the law in which case the law enforcement department would descend upon them.

The Police Administration’s warning about the doomsday prophecies dashed the hope of Ghanaians who readied themselves to listen to the predictions which features on 31st night.

With the police monitoring social media and the movements of the pastors noted for such prophecies, the warning appeared to have achieved its goal of ensuring decency in the twilight of 2021.

Obviously expecting such prophecies, the Police Administration a few days before the year ended issued a statement demanding of the religious leaders to be measured in their utterances lest they infringe upon the rights and interests of others.

“The Ghana Police Service wishes to draw the attention of Ghanaians, especially religious groups, to the fact that whereas we have the right to religion, freedom of worship and free speech, all of these rights are subject to the respect for the rights and freedoms of others according to our laws,” the statement had said.

The statement noted that over the years such prophecies about harm, danger or even death had tended to create tension and panic among citizens.

It is a crime, the Police Administration stated, for a person, by means of electronic communications to knowingly send a communication that is false or misleading and likely to prejudice the efficiency of life-saving service or to endanger the safety of any person.

Such breaches, the police noted, could have those found guilty liable to a term of imprisonment of up to five years.

“We therefore, wish to caution all Ghanaians, especially religious groups and leaders to be measured in their utterances, especially how they communicate prophecies, which may injure the right of others and the public interest,” the statement noted.

The Police Administration kept their word of ensuring that Ghanaians enjoyed the Yuletide and the New Year by providing adequate protection to residences and places of worship.

After the watch night service, the police issued another statement saying it was reviewing some videos containing prophecies made by certain pastors on December 31, 2021, to decide if the content constituted any breach of the laws of the country.

The statement signed by Director of Public Affairs, Supt Alexander Kwaku Obeng reminded the ‘men’ of God that the prohibition on prophecies that can cause fear and panic is not limited to only 31st watch night but must be adhered to on a daily basis.